Autistic People CAN Enjoy Small Talk; Depends on the Topic 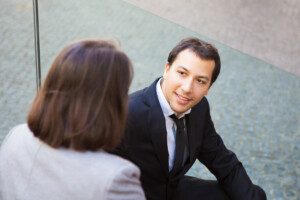 When I, an autistic woman, do “small talk,” the recipient may end up learning about ancient alien theory or why holding onto a treadmill sabotages the workout.

I always used to think that “small talk” referred to the short duration of a spontaneous verbal exchange between two people.

But since my ASD diagnosis in 2022, I now know what specifically it means: a warmup session that comes naturally between two neurotypical (NT) people consisting of trite redundant content.

Such content bores me. I don’t need a warmup. Somehow, NTs get a charge out of chattering away about the weather (though there are autistic people for whom the weather, particularly aspects of it, is a special interest!).

One day a security guard initiated small talk with me by commenting that her son had the same birthday as me. I did not want to discuss such a banal factoid.

If such a factoid is discovered during small talk, it becomes a big deal between the NTs.

Small talk also typically includes verbiage about what its participants did over the past weekend or what their plans will be for the upcoming weekend.

I’ve been asked quite a bit – by various people in service positions such as banking, receptionists, dental hygienists and doctor appointment schedulers  – if I “did anything fun over the weekend.”

Does this really interest them? I don’t think I’ve ever asked anyone about their weekend plans or “what did you do” in my entire life.

Before I began strongly suspecting I was autistic, I’d occasionally reflect about how, for me, conversation with people served one purpose: to gain information, or, as I termed it, information exchange.

My objective was to get information, even if it was non-essential, such as whether or not a cashier was wearing hair extensions. At least once, the first words out of my mouth, once the customer ahead of me was on their way, was, “Are you wearing extensions?”

I know it’s abrupt, but I’m a too-the-point person and bypass small talk. I see no point in wasting energy by first asking how her day’s been going.

One day I noticed a female cashier had rather muscular arms. I dove right in: “Do you work out?” I didn’t need to warm up with, “Nice day, isn’t it?” or, “Has your day been busy so far?”

No sir, we autistic people want to cut to the chase and get right to the subject of interest.

Needless to say, this cashier happily affirmed that she works out, and we had a delightful interaction about working out as she processed my merchandise.

More than once, my first words to a very tall female cashier were, “I envy your height.” Again, no silly small talk to warm up. I’ve always gotten a positive response from them.

Autistic people like to get right to the point instead of dilly-dallying around. However, thanks to social conditioning since very early childhood, we are taught it’s rude to just jump right in or to speak our mind.

Thus, in early life, an autistic person, especially a girl, may hesitate to do this, and may not even say anything at all.

Or, she’ll either flounder through small talk as a gateway to then start speaking on the topic of interest, or, she’ll master the art of small talk so that it sounds natural to the recipient (but it won’t feel natural to the Autist).

Though those on the Spectrum don’t care for common small talk and may at times struggle with it or feel awkward from it, or stressed and even dread it, there’s also another consideration to wonder about: Could certain kinds of small talk have appeal to autistic people?

I then launch into a mini info dump about the evidence we were visited by extraterrestrials several thousand years ago.

I’ve always done things like this, without realizing that it was probably mostly driven by my autistic brain.

I can honestly say that, if I were to review my adult life, I can’t seem to locate an incident in which I genuinely engaged in classic small talk in a natural, unforced or non-obligatory way.

However, there’ve been times I’ve definitely had to force it, faking my way through it because I was at the mercy of the other person.

For instance, the other person was my boss at a new job; the guy who hasn’t yet given me an estimate for the repair job on my car; or my new hairdresser who’s going to color and cut my hair for the first time.

The stakes were high; I fake smiled and fake nodded, and even asked about the topic they were talking about, even though I had no interest.

If the stakes aren’t as high, such as when a dental hygienist initiates small talk, I can quickly turn it into Autie talk.

I remember doing this before I began my ASD diagnosis journey, when I noted the racial ambiguity (a special interest) of the hygienist. First chance I got during the small talk, I asked what her racial background was.

I figured, what the heck, dental hygienists are in a line of work that exposes them to ALL SORTS of people; they wouldn’t be in this profession if they didn’t enjoy working with people; let’s go for it: “May I ask what your ethnic background is?”

Another vital point to consider is that when someone tries to get small talk going with me, there are times that I simply refuse to put any effort into it and it fizzles fast.

The stakes are low; I’d gain nothing by faking being NT; and I’m not in the mood to ask if this person uses a treadmill or in some other way shift the topic to one of my interests.

There’ve also been times when I don’t know how to respond (like when the security guard said her son had my birthday). The effort isn’t worth the reward when the stakes are low.

Some autistic people, especially women, are ocmpelled to “mask” no matter whom the small-talker is  — even a stranger in a line whom they know they’ll never see again.

But me? F masking; if the stranger or whomever thinks I’m not friendly, I’m not going to bear that cross. I’m not a natural reciprocater. In these instances I’ll just nod and then say nothing and hope the person goes away. But if she has muscular arms…

Autistic people aren’t robots; they’re human. There can be times when they genuinely suddenly feel like starting a little spontaneous small talk — but on their terms, of course.

An autistic woman meets her new neighbor when the neighbor strolls over while the former is pulling some weeds.

Easy stuff ensues such as exchanging names, where they previously lived, what they like about the new area, etc.

But soon into this, the autistic woman starts getting bored, or may start feeling uneasy or even stressed (depending on the individual; we’re not clones).

Then the neighbor mentions she’s pregnant.

Hmmm. Things just got interesting. One of my lifelong special interests is alternate spellings of girl names. I ask, “Do you know the sex?”

I skip the emotional response of, “Ohhh, that’s wonderful! I bet you’re SO excited!”

Anyways, she replies, “Yes, it’s a girl.” She pats her tummy and smiles big.

“Have you picked out a name?” (Sounds like a normal follow-up, right?)

“Yes, my husband and I are set on Lindsey or Avery. Down to just two now.”

Here’s where the small talk becomes Autie talk: “How will you spell either name?”

I’ll even talk about how even with names like Mary or Ann, people will often ask how they’re spelled, so thus, anticipation of “having to always spell it” should not be a deal breaker for a unique, original spelling.

I wouldn’t go Autie talk on anyone on purpose, though, as in, “This is boring; I’m going to alter the course.” Rather, my derailment is a natural unfolding of the small talk.

Those with ASD can be very talkative with people they just met or hardly know. It depends on their mood, the circumstances,  something the Autist notices about the speaker, something the speaker just happens to mention, and even a sudden distraction nearby. It’s also influenced by a need for an info-dump fix.