Can Autistic Kids Be Naturally Athletic and Coordinated? 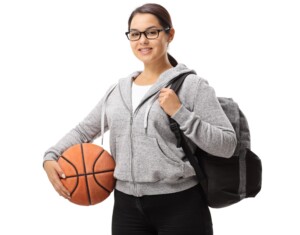 Is it just a stereotype or is it pretty much universal that even mildly autistic kids are clumsy and not athletically inclined?

I have a diagnosis of Level 1 Autism Spectrum Disorder.

Yet all through grade school, I was among the first to be chosen on teams during gym class.

The gym teacher would ask who wanted to be “captains.” This occurred quite a bit through grade school.

The two captains would be selected. They’d then choose their team. It was very predictable.

It was well-known that I was “good in gym.”

One day we were in the school parking lot playing kickball. The setup was like softball or baseball.

A kid would pitch the ball by rolling it towards the kicker who was waiting at the home plate. There were positions at the three bases, plus infield and outfield positions.

So that day, someone really kicked it good, a swift line drive coming straight for my area. I adjusted my position and deftly caught the ball in my chest, keeping it there – something that was difficult for the other kids to do, in that it usually popped out of their arms.

I was no superstar, but I was more agile and coordinated than most of the kids in my grade.

I’d always been pretty decent at connecting a bat with a ball. I was able to catch balls with a mitt.

I was able to run after a frisbee and catch it. I had what an older brother often referred to as “hand-eye coordination.”

Unfortunately, the environment I grew up in wasn’t conducive to cultivating serious athletic skills.

The school was a small, private Catholic one and had no sports teams beyond gym class until I was in the sixth grade — and at that, it was just one sport: softball.

In our basement was a ping pong table. I regularly played my father and the brother, who were better than me. As a result, I got quite proficient.

In junior high was a ping pong table in the recreation room. I was so good at beating ANY kid (I’m not exaggerating, and this includes boys), that the boys began accusing me of cheating.

How do you cheat in ping pong? You either get the ball over the net onto the other side, or you don’t. And if the other person misses a shot, you get a point.

But they couldn’t accept that a girl was beating them all, and eventually they refused to play me.

In high school I stunk at volleyball because the volleyball program stunk.

But in college I joined the volleyball club and acquired significant skill.

After college I moved to Chicago and continued playing volleyball, up to 20 hours a week in mostly pickup games. I also joined a volleyball club that consisted of superbly orchestrated drills.

Within several years I was playing at a very competitive level.

Unfortunately, getting on an “A” and especially “AA” volleyball team in Chicago was very political, meaning, you had to be good at hobnobbing among players at pickup games. Correctly reading social cues in this cliquey environment was crucial. Needless to say, I didn’t score well in that area.

I’ve never been good at masking (when autistics assume a fake persona to blend in with typical women). I eventually stopped playing volleyball because I got sick of the social requirements.

The “Little Professor” Under the Radar

In childhood nobody knew I was autistic because I grew up during a time when autism wasn’t widely recognized in girls. And when it was, it was a severe manifestation.

At the time I was growing up, what we now know today as Level 1 ASD would’ve manifested as “the weird kid,” or “the child who doesn’t seem to have any friends.”

My brother would tell me that I was a “natural athlete.” He and I would make fun of the fact that many people couldn’t even catch a ball with a mitt.

He’d imitate a klutz trying to do that. We’d talk about how clumsy so many people were.

There is no data on what percentage of autistic people are natural athletes or have always had good hand-eye coordination since childhood.

However, poor coordination and clumsiness are common among autistic kids. The percentage of autistic children who experience difficulties with movement or coordination may be as high as 80 percent.

But what about the other 20 percent?

“Motor difficulties are very common in autistic people (an estimated 87 percent of autistic people experience motor deficit), but they are not actually part of the diagnostic criteria for autism,” says Dr. Jessica Myszak, licensed psychologist, and director of The Help and Healing Center, whose practice is mostly autism assessment for adults.

“Many other mental health conditions, such as ADHD, also commonly have a strong overlap with motor deficits, and it seems to be related to connections in the brain and how different parts of the brain are working with one another,” explains Dr. Myszak.

“While it can be helpful to identify motor difficulties so that therapies like physical therapy or occupational therapy can be resources, this is not something that all autistic people experience.”

We should all know that plenty of NT kids have poor coordination. I witnessed this myself in gym class all throughout my schooling.

I saw neurotypical girls in my gym class struggling to get decent vertical height on a trampoline, while I could jump the highest in the class.

One NT girl after another failed to do the “swivel twist” on the trampoline, while I was a natural at it.

I’ve always been able to do cartwheels in a straight line, yet, even as a child, I could never understand why linear cartwheels were so difficult for my classmates.

I’ve also always been able to walk on my hands. Nobody taught me this. It was my show-off move at school.

Neurotypicals would literally stand there and not know what to do with their hands as a ball was lobbing towards them, and get hit in the chest – even face – with the ball.

It’s not accurate to state that every single autistic child is clumsy or struggles with coordination.

It’s not accurate to assume that an autistic child can’t have natural hand-eye coordination and be good at running and jumping.