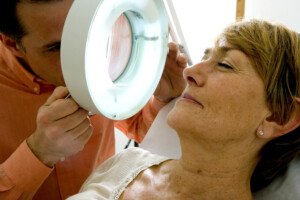 Does that little pearly spot on your cheek have tiny red “spider veins” around or in it? Better get it checked out.

Go straight to a dermatologist and request a biopsy.

Prior to my annual skin exam by my dermatologist I was inspecting my face using a 20x magnification mirror.

I don’t see up close very well due to age-related presbyopia (which is why I need reading glasses despite having had LASIK).

I came upon a very small area of my cheek that was lighter than the surrounding skin, and this lighter area didn’t seem familiar, even though my previous face exam had been only four weeks prior.

The common spider veins that usually appear on a woman’s legs, and also those that may occur on one’s nose, are a purplish or purplish-red color. There’s some degree of purple or violet to them.

But the two, barely visible blood vessels on my cheek were solid red—blood red. No purple tinge at all.

The very small spot within the blood vessels could accurately be described as “almost like a pearl-flesh color.”

So we have tiny blood vessels + pearl that was never there before.

Only one explanation came to my mind: basal cell carcinoma—a type of skin cancer. 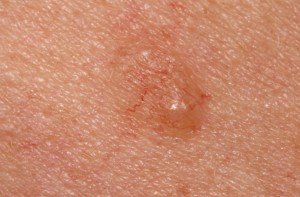 This is what I expected, even though I couldn’t feel the spot with a fingertip.

My fingertip couldn’t detect a variation in skin surface. It was not a bump. It was not raised. It was perfectly flush with the surrounding skin.

Next day I had my visit with the dermatologist. She begins routine exams by asking if there’s any areas of concern.

I asked for a mirror; holding it up to my face I located the area and pointed to it. “Yes, right here.”

With her dermatoscope she inspected the area, then stepped back and said, “What about it?”

Her response may sound callous and uncaring, but the WAY she said it was anything but.

The way she spoke sounded as though she immediately knew what the very tiny spot was, and was impressed that I had not only found it, but had it under suspicion.

I replied, “It has the tiny blood vessels.”

She said it needed to be biopsied.

I commented, “This would be missed by 99.9 percent of the population.”

She didn’t tell me what she thought it was, and I didn’t ask. I knew, and she knew I knew. She said the biopsy results would come back in a week.

If you think you have this but are scared to get it checked out, here are some very encouraging, reassuring facts.

The odds of a basal cell carcinoma metastasizing are extremely rare.

Instead, when left untreated, this very slow-growing cancer causes local damage—which can be gruesome.

But it takes many years to get that way, and only because the patient neglected it for many, many years (this might happen in a developing country where extreme poverty and lack of education are pervasive, or in the U.S. among people who have mental health issues that cause them to live in isolation and to refuse basic medical checkups).

My brother had a basal cell carcinoma that grew for five years on his forehead before he finally decided to get it checked out.

By then, it was a slightly raised spot the size of a dime. That’s how slowly this skin cancer grows.

Basal cell carcinoma is essentially a product of excessive sun exposure during youth, and takes decades to start appearing.

Thus, the BCC that you might have at age 50 was probably set in motion by all the sun exposure you had during your elementary and high school years.

If your skin is dark, this doesn’t make you immune to BCC.

People with dark skin can get basal cell carcinoma, though it’s exceedingly rare in this population.

If you notice something on your skin that wasn’t there before, and it won’t go away, and especially if it’s getting bigger, then get it checked out. Treatment for BCC is outpatient microsurgery called Mohs.

• A tiny, new nodule or bump that’s either flesh or pink colored, some shade of brown or brownish-red, or has a whitish or pearly color. The new spot may also be flat.

• The spot may appear translucent, as though you can see through its surface.

• The spot may also be scaly and have a raised edge or a waxy appearance. The spot on my cheek kind of looked waxy. Using a 20x magnifier really brings out details.

• Tiny, very thin, red blood vessels running through it or apparently around it.

• In a location that gets a lot of sun exposure—primarily the face; it especially affects the nose.

• As it grows, it may bleed or crust.

UPDATE: The lesion was determined to be a benign patch of scar tissue with a keratosis. However, in the report that was sent to the pathologist, my doctor’s clinical observation stated “BCC.” ALL suspicious spots should be biopsied.