Ripping Chest Pain Lasting 5 Seconds: Get to the ER

Sudden ripping chest pain, even for only five seconds, can mean a life threatening situation; get to the ER as soon as possible.

It occurred when she bent over, and it had spread to the side of her neck, around her ear and down her jaw.

Six months prior her annual physical had been normal, nothing suspicious.

At age 62, Debra Erdley had a history of aerobics, spin classes and distance cycling, plus normal blood pressure.

Then six months after that uneventful annual physical, she bent over in her garden plot and was suddenly hit with excruciating chest pain.

But the unexpected chest pain, as intense as it was, lasted all of five seconds.

Erdley didn’t bother calling for help because strangely, she wasn’t short of breath or didn’t feel any other symptoms. Perhaps it’d been just a muscle spasm, she may have figured.

Until later that afternoon, when the nausea struck. The presence of nausea is a real game changer, in that when paired with sudden severe chest pain, means get to the emergency room.

Her sister, a nurse, urged her to get to the ER immediately, recognizing the symptoms as those of a woman’s heart attack. But it didn’t turn out to be a heart attack. It turned out to be something extremely unexpected … but still life threatening.

It was an aortic dissection. Often, the first symptom is the pain that’s caused by the dissection.

“The aorta is the large artery carrying oxygenated blood away from the heart,” says Dr. David Beatty, MD, a retired general practitioner with 30+ years of experience and an instructor of general medicine for 20 years.

“It climbs upwards out of the left ventricle (ascending aorta) into the aortic arch where it curves downwards into the descending aorta.

“This runs through the chest cavity as the thoracic aorta and then becomes the abdominal aorta as it passes below the diaphragm.

“Arteries supplying blood to the heart muscle, brain, arms, kidneys and bowel branch off at various levels. In the abdomen it divides into the arteries which supply the legs.” 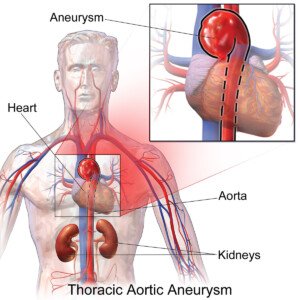 “This can cause severe blood loss and is a life threatening emergency,” says Dr. Beatty.

“A dissection in the thoracic aorta can cause sudden chest pain which can be described as tearing or ripping.”

A tear in the aorta means blood leaking outside of this vessel, rather than going to vital organs including the brain.

The leak could be big enough to cause death in minutes. In Erdley’s case, despite the delay in medical attention, she survived, having had a Dacron stent graft placed in her aorta, sealing the tear.

In fact, her heart itself was in good shape; it was just that a portion of the aortic wall had become dilated and weak, prone to rupturing.

Aortic aneurysms are usually discovered incidentally by imaging for an unrelated purpose, such as a chest X-ray when pneumonia is suspected.

Within six weeks Erdley was able to run five kilometers.

Eventually, her son was found to have an enlarged aorta. Her mother and older sister eventually had to undergo a stent graft repair for a thoracic aortic aneurysm.

The condition tends to run in families, but there are cases for which no familial tendency is found.

Very severe chest pain that lasts five seconds is usually not a sign of a heart attack or clogged arteries.

However, any kind of sudden, unexpected chest pain that you’d describe as “stabbing,” “piercing,” “ripping” or “excruciating” could be the start of an aortic dissection.

“Risk factors for aortic dissection are hypertension, atherosclerosis, bicuspid aortic valve (two cusps instead of the usual three) and some connective tissue diseases such as Marfan’s syndrome,” says Dr. Beatty.

A person can have Marfan syndrome and not know it.