Why Does Sneezing Cause the Lower Abs to Twitch? 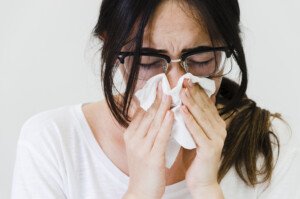 Do you sometimes get a twitch in your lower abdominal area right after sneezing? Sometimes it’s two or three twitches – a split second after a big sneeze.

A big, uninhibited sneeze can make your whole body jerk.

That’s perfectly normal and is due to the force of the sneeze. This is why, if you’re holding a glass of water at the time you let out a sneeze, the water will slosh around, possibly spill out.

However, while your whole body moves, or a split second after, you then feel a twitch somewhere in your lower stomach.

It’s the same kind of twitch that you’ve probably felt in your eyelid, or perhaps some other part of your body such as the calves or the front or back of a leg.

The “sneeze twitch” lasts just a second or, if it repeats, then several seconds.

When a Sneeze Causes an Abdominal Muscle Twitch

“Fasciculation can be caused by something affecting the lower motor neuron — the nerve running from the spine to the relevant muscle,” says Dr. David Beatty, MD, a retired general practitioner with 30+ years of experience and an instructor of general medicine for 20 years.

“Alternatively, it might be because sneezing briefly raises the pressure of the fluid within the spinal cord.

“This might put pressure on the nerves exiting the spinal cord, causing the twitch.”

Your concern over either phenomena should be limited to curiosity. Nothing more.

Getting that brief, squirmy crawly feeling under your skin from a sneeze is absolutely nothing to be concerned about.

A giant sneeze jostles things up. It’s perfectly normal for a small area of muscle fiber to get buzzed from the force.

This scenario is not a sign of neurological disease.