Trouble Breathing at Rest but Not During Exercise? 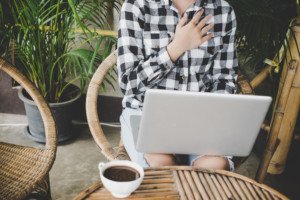 Do you sometimes experience trouble breathing — but only at rest and never during or soon after exercise? Like when you’re at a computer?

The feeling may be described one of two ways: as a mechanical issue with breathing OR as shortness of breath.

And some people may not even be sure which of these two categories the symptom falls into.

But one thing is for sure: It’s related to breathing and, when it occurs, it’s always at rest.

The strange thing is that most of the time while one is inactive (using a computer, watching TV, trying to fall asleep, lying in bed after waking up in the morning), everything feels fine.

Another odd (though reassuring) thing is that it never occurs during physical activity, whether it’s dashing up a staircase, doing yardwork, running, lifting weights or any kind of gym workout.

“The faster types of palpitations such as supraventricular tachycardia, atrial fibrillation and ventricular tachycardia can certainly cause breathlessness,” says Dr. David Beatty, MD, a retired general practitioner with 30+ years of experience and an instructor of general medicine for 20 years.

“They are probably all more likely to occur with exercise though,” he says. It’s not really likely, then, that the oddball symptom is being caused by an arrhythmia.

But keep in mind that a new-onset arrhythmia may, just by chance, start up when you just happen to be at rest. You may also not be able to feel its irregular heartbeat.

“It’s possible that asthma or allergic rhinitis could be triggered only when at rest,” says Dr. Beatty.

“This would largely depend on whether triggers for that person’s allergy were present.

“Dust, molds due to damp, flower pollens or animal danders might all be responsible in certain places. However, many people with asthma are worse with exercise.”

Dr. Beatty says, “It’s possible that the breathlessness is due to positional factors.

“When sitting or lying down, a hiatus hernia might be pushed up into the chest cavity — exerting a pressure effect on the lungs. This is more likely to be a factor in overweight people.” 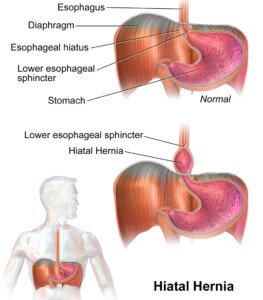 Of the three possible causes thus far, especially if the sufferer is overweight, this is the most likely cause.

But it begs the question: If a hiatal hernia is present, why wouldn’t the strange sensation of trouble breathing be present all the time? Why does it occur only sometimes, or even just very occasionally?

There are two reasons. First, the hernia may be a sliding type.

A sliding hernia comes and goes. The stomach and the lower part of the esophagus slide up into the chest through the diaphragm (the muscle used in breathing). And the structures can slide right back out spontaneously.

Thus, you’d have the issues with breathing only when they’re slid into the chest and when you’re seated or lying down.

The second explanation is that of weight fluctuations. Erratic eating behavior can result in periodic weight gains. The person then loses weight, then regains it when food intake increases.

The periods of “trouble breathing only at rest” may coincide with periods of weight gain – as this extra abdominal weight puts pressure on the stomach, resulting in a sliding hiatal hernia or aggravating a pre-existing one.

“This is generally in people with underlying heart problems,” says Dr. Beatty.

“They wake up with severe breathlessness and have to sit up for relief.

“It’s due to a buildup of fluid on the lungs. I would, however, expect them to get some symptoms associated with exertion.”

“This is, perhaps, the most likely cause of the scenario,” says Dr. Beatty.

“It’s possible that while working on a computer, anxiety levels may build up.

“When sitting in an office there may not be the opportunity to burn off the resultant adrenaline with physical activity.”

When one is active (housework, childcare, shopping, walking a dog, working out), the physical exertion (even if light) distracts their mind, making it much less likely for anxiety to affect breathing.

A good way to verify this is to ask yourself — when the dog walking, housework or exercise is finished — if you had experienced any perceived issues with breathing during the activity.

Another activity during which psychogenic breathing problems become subdued is conversation or becoming transfixed listening to music or while reading a very compelling story.

Ask yourself if you’ve ever had problems with breathing during these sedentary, though mindfully busy, activities.

Keep track. If anxiety is the cause, you’ll soon discover that your breathing is always normal during all of these aforementioned activities.

But if you discover that the trouble breathing occurs during the entire gamut of activities, and especially if there are other symptoms (dizziness, faintness, chest pain, nausea, coughing), a doctor needs to rule out all other possible physical origins.

“I have always been very wary of diagnosing anxiety without excluding other physical causes first,” says Dr. Beatty.

Excluding Serious Causes of Problems Breathing or Shortness of Breath

“A normal chest X-ray is reassuring but not conclusive,” says Dr. Beatty. Conditions that it can exclude include pneumonia, fluid in or around the lungs, fluid around the heart and visible lung cancer.

“A normal ECG is good, but it doesn’t exclude intermittent arrhythmias.

“A 24 hour ECG has a better chance of catching an arrhythmia, but if the event is only occurring every few days or weeks. this can also miss the problem.

“Small heart monitoring devices are now available. Their size is comparable to a thick credit card.

“When the person feels the symptoms of breathlessness or palpitations they put their fingers on the device.

“A 30 second heart rhythm strip is sent to a mobile phone and can be forwarded on to an email in a PDF format. Two brands I have heard of are Snap ECG and Kardia Alivecor.”

If you’re interested in a more traditional approach, a doctor can set you up with a wearable event monitor for long-term use.

“Giving the patient a peak flow meter ( PFM) will give them the ability to assess whether or not they have asthma.

“The PFM measures the amount of air cleared from the lungs in one second.

“The score will be reduced at the time of an asthma attack compared to when the person is well.”

What about the hiatal hernia?

You’ll need to consult with a gastroenterologist.

An upper endoscopy is pretty good at detecting such a hernia, but it’s also possible to miss it, especially if this procedure is done at the time the hernia has slid back out.

A barium swallow can detect a hiatal hernia that was missed on endoscopy.

But remember, a test won’t find it if the stomach and esophagus have slid back into normal position.

What about lung cancer?

Coughing is a premier symptom. It’s reassuring if you haven’t developed an unexplained cough or chest pain.

Once lung cancer starts causing symptoms, they will get noticeably worse over time, and exertion will bring on shortness of breath.

The longer the time period that your episodes of trouble breathing span, without any new additional symptoms, the more reassuring that cancer is not the cause.

Finally, for those who are wondering, obstructive sleep apnea will not cause any issues with breathing while a person is awake.