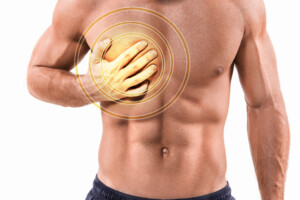 You had an upper endoscopy earlier in the day yet still have right chest pain or chest pain in general.

Should you call your doctor, go to the ER or just wait it out?

An upper endoscopy is also called an EGD (esophagogastroduodenoscopy), as it examines the esophagus, the stomach and the duodenum (part of the small intestine).

Usually, when the procedure is over, the patient won’t have any pain or other discomfort.

In fact, typically they’re fast asleep by the time the scope is inserted and then awaken feeling just fine after the doctor is finished with the procedure.

However, it’s not impossible for an EGD to result in pain afterwards, including pain that lingers.

Pain in the Right Chest Following an EGD

“Pain is much more commonly a problem after colonoscopy, as large amounts of gas are pumped into the bowels.

“However, even in colonoscopy it is less of a problem nowadays, as most centers use carbon dioxide instead of air to distend the bowel.

“Chest pain (wherever it is located) should always be taken seriously if it occurs after standard diagnostic endoscopy.

“Brief, mild and self-limited pain that resolves within half an hour may not be of major concern, and could be attributed to distension of the stomach with gas.”

This gas-caused distension could actually result in pain that the patient perceives in the chest somewhere.

“In this case, it usually responds to painkillers and subsides over 24-48h.”

What if the chest pain doesn’t go away?

“However, any other persistent or severe chest pain after endoscopy always raises concern for a complication of the procedure such as perforation,” explains Dr. Sanagapalli.

“Such a patient should always be reviewed by the endoscopist prior to leaving the hospital, and further tests such as a CT scan may be required.”

Thus, if you have concerning pain after your EGD, speak up to your gastroenterologist.

Though it’s more likely “nothing” than a perforation, don’t let this stop you from telling your doctor – right then and there — especially since a perforation wouldn’t be the only possible cause of chest pain.

“Causes of chest pain arising from the heart and lungs (e.g., a heart attack or pulmonary embolus) should also be considered, as these may occur as a complication of the anesthesia given for the endoscopy.

“To be clear, this would be a rare occurrence after endoscopy (but so would chest pain in general).

“I mentioned such uncommon non-GI causes — as once a perforation is excluded, and assuming a dilatation was not performed during the endoscopy, there is essentially no other GI cause of persistent/severe chest pain following diagnostic endoscopy.

“Therefore, if this is the situation, other important non-GI causes need to be considered.

“Myocardial infarction (heart attack) can be an adverse effect of anesthesia, and the risk of DVT/PE is increased following any surgical procedure.”

Do not let these VERY RARE complications stop you from having a needed upper endoscopy. Remember … the EGD was ordered to find out what’s causing your symptoms.