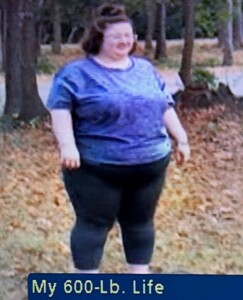 Every so often, the teen or adult child of a patient on “My 600 Pound Life” is nearly as big as the parent.

A perfect example of this is Haleigh, the daughter of Carrie (the patient).

The irony is that she was telling the interviewer that she was very worried about her mother’s health, including having fear over her increasing difficulties with breathing.

Footage of daughter Haleigh clearly shows a young woman who is at least 350 pounds, and in one scene in which she, her boyfriend, Chris (Carrie’s husband) and Carrie are eating, she looks well over 400.

This child clearly appears on the same track as her mother.

After all, Carrie was nowhere near 600 when she was Haleigh’s age.

One must wonder how the 600 pound parent had ever allowed their child to grow up to be so overweight.

Perhaps it happened because that child grew up in a household that was always well-stocked with a ton of junk food.

But why would that be, since the parent certainly wouldn’t want their child to become like them one day?

It could be a way of denying the problem; the parent doesn’t feel as bad if his or her child develops the very same problem.

To a child growing up in this environment, excessive food intake is a way of life. The household environment revolves around food.

That means a LOT of food coming into the home.

Hopefully, as Carrie and others like her drop the pounds, the morbidly obese grown child will start taking some accountability and opting for healthier eating habits, portion control and structured exercise.