Have a Weak Core? Try the Plank Exercise 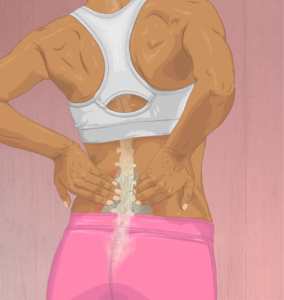 If you seem to have a weak core (low back and abdominal area), you’ll want to try the plank exercise.

This simple exercise will strengthen your core region.

Think of this as the top position of a pushup, except that the arms are bent.

The body, between the arms and the feet, should be as straight as possible rather than drooping. Those with a weak core may not be able to hold this position without their butt sticking up. 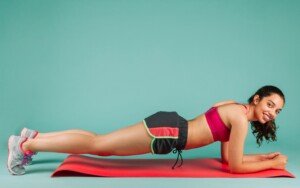 To hold this position, the abdominal and lower back muscles (core) must be activated.

They are in contraction, isometrically, meaning, these muscles are neither shortening nor lengthening.

But they’re still getting worked nevertheless.

One of the myths about abdominal exercise is that in order to work the abs, a person must do repetitions of bending, folding, crunching, twisting, etc.

This is absolutely not true.

The abs can get a fantastic workout without the trunk moving at all — not moving side to side; not twisting, swiveling or rotating; and not crunching, folding or bending.

Even with a Weak Core You Can Work on Planking

Many people who do planks go for duration, holding the position for up to five minutes.

This will not strengthen the abs or lower back all that much, any more than jogging for distance will create strong legs.

All a long-held plank will do is improve the ability to hold a plank for longer periods of time.

To build a more effectively strong core, you should aim for short duration UNDER ADDED RESISTANCE.

The resistance is increased with weight plates on the middle/upper part of the back. 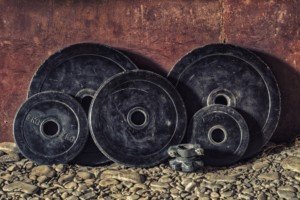 Though it’s possible to place and remove the weights there yourself, it’s better to have a partner do it.

You should master perfect form for 30 seconds before adding weights.

The goal is to hold the plank for up to 30 seconds with the weight.

Once you can hold the weighted plank for 30 seconds, it’s time to increase the weight by five (2.2 kg.) or 10 pounds.

This builds incredible strength in the core, including the abdominal muscles, even though there is no bending, folding or crunching.

What prevents the body from sagging in the middle or caving downward is that isometric contraction of the abdominal muscles, along with the lower back muscles.

For those who already feel that their core is quite strong from performing deadlifts, it’s highly recommended that they do not jump the gun and start off with a lot of weight on their back for planking.

A fit person – who’s never done planks — actually may be capable of starting right off the bat with a 25 pound (11.3 kg.) plate for 30 seconds — and then walk away from that and feel proud.

However, you may pay a heavy fine the next day in the form of very sore abs!

This soreness can last several days. This is why it’s important to just start out with 10 pounds max no matter how strong you think your abs already are from heavy compound weightlifting.

To transform weak abs to strong abs, do two sets of planks, as described in this article, twice a week.

In addition, make sure you’re also doing other core strengthening exercises such as the deadlift, the barbell squat and toss in some yoga poses.

Decline sit-ups with your arms folded to your chest will also strengthen the core.