Pain in Upper Right Abdomen Only When Burping 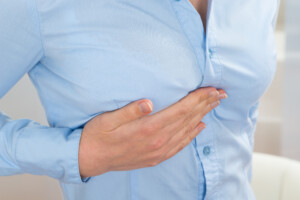 Do you get pain in your upper right abdomen ONLY when you burp, lasting only a second or two with the burp?

Sometimes the pain is in the middle of your upper abdomen, below the breastbone (sternum).

This is what began happening to me one day.

I had been burping a lot lately (always with my mouth closed).

I attributed it to excess food intake.

But then one day, DURING a burp, I felt this mild pain. It lasted for the duration of the burp.

For the next several weeks it accompanied all burps.

It was never there at any other time, though on occasion, it came on a few seconds before a burp.

Initially I thought it might be a pulled muscle, but I soon ruled that out.

I also speculated there could be something going on with my liver, since the liver was in the area of the pain.

But I kept telling myself that it HAD to be the esophagus, because when we burp, the “air” comes up the esophagus. And it was burping that caused this pain.

This went on for months, though there were three times when, for a few weeks, it was completely gone. Those three periods of remission were also when I had lost a little excess weight on purpose, but when the weight came back, the pain returned.

At the six month mark, I figured that if this were anything serious, I would’ve been suffering severe symptoms by then.

At the five month mark, however, I had consulted over the phone with a gastroenterologist, since in-office visits were locked down due to COVID-19.

He had no idea what was causing this oddball symptom, and I couldn’t find anything on the Internet.

Sure, there were many search results for abdominal pain and burping as separate symptoms.

But there was absolutely nothing on pain CAUSED by burping.

The doctor approved me for an upper endoscopy.

I suspected acid reflux as the No. 1 possibility, especially since I was then beginning to experience a mild burning in my throat from time to time.

Then one day I felt the exact same pain, same location, two seconds after swallowing food and lasting only a second or so.

What is the food making contact with that causes this sensation, I kept wondering.

I then began taking Nexium. Though it’s recommended for only 14 days at 20 mg/day, I took 60 mg/day (lower didn’t work) for eight weeks, after reading in medical journals that this is a typical treatment for “reflux esophagitis,” which I hoped I had, since this was the most benign explanation.

More months passed until I finally worked up the nerve to make the appointment for the upper endoscopy (with a new doctor, since the previous one was located rather far away).

During the phone consultation (still no traditional initial office visits due to COVID-19), she said her suspicions were “GERD, GERD and GERD.”

In the meantime, the acid-reducing Nexium definitely calmed things down, meaning, there were many times during eating when I did not get that pain two seconds after swallowing.

After I tapered off the Nexium by 10 mg/week, the situation remained calmed down, and over the next several weeks, gradually dissipated, so that by the time I met the new doctor for the first time in the upper endoscopy room, I told her that I’d been symptom-free for weeks – save for sometimes I was still getting the pain only with burping.

Upper Endoscopy: the Only Way to See Things 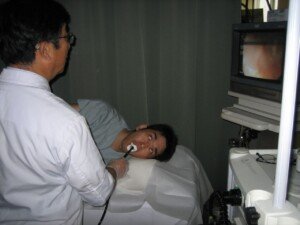 It’s really true: You sleep through the entire procedure. One moment I was telling the nurse to put a pillow between my legs and then hearing the doctor (while my eyes were closed) tell me she had to place the mouth clamp – and next moment I was hearing her saying that my esophagus looked normal.

The upper endoscopy also looks at the stomach, small intestine and duodenum: all normal.

The doctor said that the esophagus is sensitive to contact with acid, which was causing the pain.

At the time of this posting, I’m waiting to hear from her as to why food, upon going down my esophagus, was triggering this pain.

What caused this situation in the first place?

Beginning in 2018 (and continuing into 2019 and 2020), due to enormous amounts of stress and anxiety (related to family matters and excluding COVID-19), I began eating a ton of food to cope.

Though I continued with my intense workout regimen, I gained weight – enough to induce excess acid production, according to my primary care physician (whom I had only email contact with) and the gastroenterologist.

Coinciding with the tapering off of the Nexium, and the weeks following that, was another round of intentional weight loss.

Coinciding with that timeline, as mentioned, was the continued calming down of the pain, which included increasingly LESS frequent episodes of the burning throat.

I want my buff physique back, and I certainly don’t want GERD, so despite using food to cope all this time, I am now done with that and intend on getting back down to the weight my body is supposed to be at.