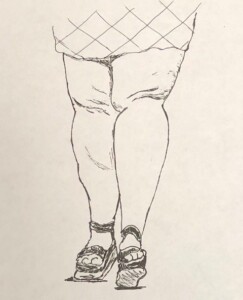 You’ve probably seen many very obese women whose knees look backwards – that is, like the backs of one’s knees.

When you’re viewing her legs from the front, the knee area resembles what the back of the knee typically looks like.

To wonder about this is not the so-called fat shaming. It’s a very fair question by laypeople who are simply curious.

The answer, though, may seem as simple as, “If you have enough fat on your leg, the knee will look backwards.”

But the explanation goes beyond this.

Though not all knee replacement patients are overweight, this is not the least bit relevant to the dangers of severe obesity – especially to the knee joint as Father Time marches on.

Or, to put it more accurately, here is an explanation for why the front of a morbidly obese woman’s knees may look like the backs of the knees.

Though age is a factor, it can become an issue even in a woman’s 30’s.

“As we age, the flesh on our thighs begins to sag, just like it does on our faces,” says Barbara Bergin, MD, an orthopedic surgeon at and co-founder of Texas Orthopedics, Sports & Rehabilitation Associates.

“And just like on our faces, in some it is worse than in others. I often have even thin people come to see me about bulges around their knee.

“They often think they are tumors, because these bulges are not always symmetrical.

“These bulges often develop because the fascial layers of flesh are naturally tacked onto muscles, tendons and bursas all around the knee.

“Those remain intact, and that’s why our thigh flesh doesn’t sag all the way down to our ankles in great waves, like it does on the underside of our upper arms, creating bat wings.

“In a morbidly obese person, the fat cells are bigger, and so they don’t wrinkle as much, but the flesh is still loosening anyway, and so they form large areas of fatty deposits around the knee, held in place by the fascial attachments.

“The fatty deposits in front and above the kneecap can kind of look like the Baker’s cyst (fluid-filled bursa) in the back of a normal-sized person’s knee.

“The front and back of a morbidly obese person’s knee can be quite profoundly bulgy.”

Morbid obesity is a MAJOR risk factor for the future need for a total knee replacement surgery. This joint was just not meant to support excess body fat.