Is Chest Pain in Women More Likely a Heart Attack or Benign? 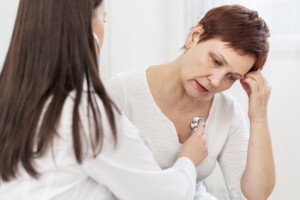 Is there anything unique about heart attack chest pain in a woman that she could tell it’s probably a heart attack rather than something benign?

After all, heart attack symptoms in women differ overall when compared to those in men.

So what are the chest pain features in a woman that might suggest a heart attack?

Chest pain in a woman can have 34 characteristics, says a study, which set out to find out if any of those features are hardcore indicators of a heart attack.

Turns out, despite all those signs, none can be used to determine with certainty that a woman with chest pain, indeed, is having a heart attack.

The study comes from the University Hospital Basel in Switzerland.

The researchers conclude that in women, chest pain simply cannot serve as an accurate tool for diagnosing a heart attack.

The full report appears in the Nov. 25, 2013 JAMA Internal Medicine.

In the emergency room, says this paper, doctors should rely on objective tests, including an electrocardiogram and the troponin test, which is taken from a blood draw.

These tests were given to my mother when she was in the ER for chest pain. The doctor urged her to consent to admission when the troponin result came back elevated.

She refused because she simply didn’t want to be admitted to a hospital, and perhaps she was in denial that anything serious could be wrong.

If you’re ever in a situation like this with a stubborn parent  —  do NOT give in to their stubbornness or denial; it could cost them their life. I talked her into being admitted.

Turns out my mother’s coronary arteries were nearly completely blocked, and next evening she underwent quintuple bypass surgery.

“Doctors must be much more aggressive in trying to diagnose heart disease through EKG and troponins,” says cardiologist Dr. Suzanne Steinbaum in the report, “because without those objective data, it’s very hard to tell it’s a woman’s heart.”

Symptoms such as chest pain are important, however, in determining that someone should go to the ER, notes cardiologist Dr. Nieca Goldberg in the report. “Get to the hospital as soon as possible,” she says, if you have chest pain.

The report says that about 90 percent of people having a heart attack report chest pain or some kind of discomfort in that region.

Women, more than men, are also more likely to have other heart attack symptoms such as shortness of breath, pain in the back, neck or jaw, nausea and vomiting.

Those 34 features of chest pain, mentioned at the beginning of this article, include items such as: location, what the pain feels like, where it’s radiating from, and whether or not movement, breathing or other things intensify the pain.

Dr. Steinbaum emphasizes that if a woman has chest pain, it’s “very difficult” to determine if it’s cardiac related, let alone a sign of an impending heart attack or one in progress.

Dr. Steinbaum has been awarded a New York Times Super Doctor, a Castle and Connolly Top Doctor for Cardiovascular Disease, and New York Magazine’s prestigious Best Doctors in the New York edition. She is on the NYC Board of the American Heart Association.