How Many People Get DVT While Not on Blood Thinners? 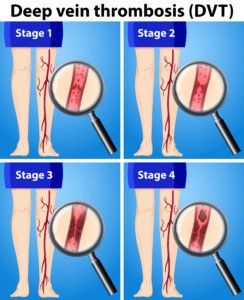 Out of 900,000 annual U.S. cases of DVT, how many patients are not on Coumadin, a potent prescription blood thinner?

“It is difficult to perform generalized population studies on DVT’s because one must consider other risk factors,” says Kevin Casey, MD, FACS, a vascular surgeon with West Coast Vascular.

The overall incidence of recurrent, fatal and nonfatal venous thromboembolism (VTE) in the United States is greater than 900,000 cases annually.

Despite those big numbers, risk factors of blood thinner side effects must be considered.

“Patients who are critically ill, diagnosed with a malignancy, with hypercoagulable disorders, spinal cord injury, recent trauma are all at an increased risk for developing a VTE,” explains Dr. Casey.

The term VTE (venous thromboembolism) encompasses both DVT and PE, in that a DVT has the potential to dislodge and migrate to the lungs, resulting in a pulmonary embolism.

“Of course, the majority of those patients are not on chemical prophylaxis,” continues Dr. Casey.

In other words, they’re not on a blood thinning drug to lower the chances of developing the condition.

“Those patients who develop a VTE while on chemical prophylaxis are candidates for an inferior vena cava filter [IVC filter} to prevent new or more pulmonary emboli.”

The implanted filter traps blood clots before they can get into the pulmonary arteries.

Symptoms of a DVT

Symptoms of a Pulmonary Embolism