Can Heart Attack Be Ruled Out in the ER without Imaging Tests? 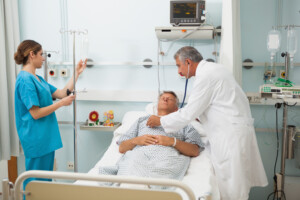 When a patient presents to the ER with chest pain, this can mean a heart attack.

Is it possible to rule OUT a heart attack without imaging tests?

Often, a patient is admitted to the hospital for tests, which may include imaging such as an echocardiogram and the highly invasive catheter angiogram.

Heart attack is difficult to quickly rule out.

“Technically speaking, imaging studies are not used in the diagnosis of a heart attack,” says Christopher J. Hanifin, PA-C, who was previously a physician assistant in open heart surgery with Cardiothoracic Surgery of South Bend in South Bend, IN.

“A heart attack is diagnosed primarily on the basis of cardiac enzyme testing [a blood test] and electrocardiography [EKG].

“Imaging studies can help to identify the presence of coronary artery disease, which is the major factor leading to heart attack.

“A patient who presents to the emergency department with chest pain will frequently have a chest X-ray performed.

“While the X-ray will not directly diagnose a heart attack, it can provide clues to a variety of things which cause chest pain.

“A collapsed lung or enlarged aorta may be visible. If the heart is not pumping well, the lungs may fill with fluid.

“A classic test to identify areas of the heart with poor blood flow is a stress test accompanied by a nuclear medicine scan.

“Scans of the heart are performed at rest and after a patient exercises, and the results are compared.

“If a patient has blockages in their coronary arteries, areas of the heart fail to ‘light up’ on the scan after exercise.”

In summary, imaging tests cannot rule out either that you just had a heart attack, or that you may have one in the next 24 hours.

This is because even in the absence of a lot of fatty plaque buildup in the heart (which would show on an imaging test), the patient may still suffer a heart attack due to causes OTHER than fatty deposits blocking blood flow.

For example, a heart attack can be caused by a rhythm disorder called atrial fibrillation – which, even in someone with fairly clean arteries, could cause a blood clot.

Another pathway to a heart attack is a fragmentation of soft plaque – even though the patient’s arteries are only 30 percent blocked.

If a piece of this plaque breaks off, the body’s repair system “thinks” that the indent that the breakage caused is an emergency hole that needs to be quickly plugged.

A clotting mechanism is triggered, but may over-correct by over-plugging the area, causing a complete obstruction in the vessel – cutting off blood supply: a heart attack. Below is an illustration of this process.

It should now be clear why imaging can NEVER rule out a heart attack, either just recently or pending.