Why Do Men Often Say “See What I’m Saying?” when Talking? 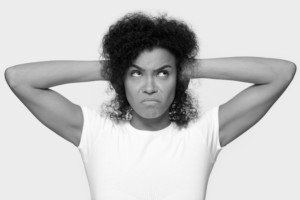 Just how many people are super annoyed at hearing men repeatedly insert “See what I’m saying” or “Know what I mean” when speaking?

Just why do they do this?

This habit seems to be far more prevalent among men than women, but I’m sure that women commit this bad habit too.

One of the men I kept hearing this from was the owner of a company I worked for. You can see why I never brought it to his attention.

I’ve heard many men – who were guests on talk shows — repeatedly insert some variation of “See what I’m saying.”

I’ve also heard it quite frequently on court TV. And I don’t mean a sincere “Know what I’m sayin”? or something similar, in which the speaker pauses to let the listener respond “Yes” or “No.”

I’m talking about literally injections of this rhetorical question coming in at regular intervals – without much talking in between.

How can these men (or women) NOT realize just how annoying it is for the listener to keep hearing this?

Another man who kept doing this was a coworker who was training me. He was in a position to report my work productivity to the department manager.

Again, I had to keep my lips zipped and put up with countless “Know what I’m sayin?” day in and day out.

“Phrases like ‘See what I’m saying?’ may have started out as originally being a concerned pause for clarifying conversation,” says Patricia Celan, MD, a psychiatry resident at Dalhousie University in Canada.

“These phrases have slowly morphed into being rhetorical questions that may demonstrate the speaker would like some validation that you agree,” even if the talker doesn’t pause long enough for you to show some sign of agreement.

Dr. Celan continues, “However, often a simple ‘you know?’ is an overused idiom that typically has little meaning other than being a habit.

“Much like saying ‘um’ or ‘like,’ filler language has a tendency to be used when someone is thinking aloud and is uncomfortable pausing during speech while processing the next thought.”

Sometimes (as in the case with the two particular men already mentioned) you just have to bite your lip and put up with it.

So if you’re meeting your boyfriend’s father for the first time, and he keeps inserting “Know what I mean?” every 15 seconds – well, maybe you should just keep quiet about it.

Same thing if the speaker is the one interviewing you for a job, conducting repairs or renovations in your home, or fixing a problem with your computer.

But what if it’s someone of no consequence to you, such as a person you’re meeting for the first time at a party?

You may never see this person again, and thus, may choose to just put up with the habit for that evening.

However, what if it’s a neighbor? What if it’s a coworker whose opinion of you will never matter to your boss?

What if it’s your niece or nephew?

Perhaps these individuals would actually appreciate someone pointing out the ongoing habit.

Depending on just what connection the individual has to you, you can make a brief whistling sound or go “beep-beep” or “ding dong” every time they let loose with a filler idiom.

You may be beeping or ding-donging every 20 seconds or even less. It would be interesting to see how long it would take the speaker to make the association.

Or, you can just straight out point out the habit. Some people can pull this off without hurting the talker’s feelings, while others lack this skill and no matter how hard they may try, will come off as critical and rude.

Certainly, we can all agree that nobody wants to have an annoying speech habit, especially if it occurs while they’re being interviewed for a job or sized up by their new girlfriend’s parents.

If you had a very annoying filler habit while speaking, such as, “See what I’m sayin,’” wouldn’t YOU want to know?