Why Young Women Should Learn to Walk a Mile Briskly Nonstop 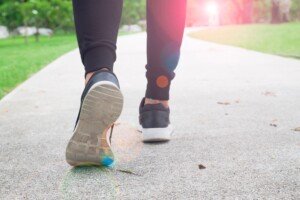 Perhaps if Dawnia Dacosta were able to effortlessly walk a mile nonstop, she would not have been raped and murdered.

This is a very fair speculation, being that the young woman accepted a ride from a stranger when her out-of-gas car was just one mile away from the gas station where she purchased a can of gas.

When 21-year-old Dawnia’s car ran out of gas in the wee hours of the morning, she actually walked a mile to the gas station.

Nobody knows if she had struggled with this. Witnesses only saw her at the gas station get into a van with a stranger offering her a ride.

Nobody knows why the young woman thought it was safer to get into a metal cage with a man she’d never seen before rather than walk the mile back to her car.

Speculation is that he convinced her it was safer to ride with a man she’d never met than walk a mile alone on a dark road.

However, it’s very tempting to wonder if Dawnia would have promptly refused had her body been used to briskly walking a mile without feeling fatigue or working up an uncomfortable sweat. 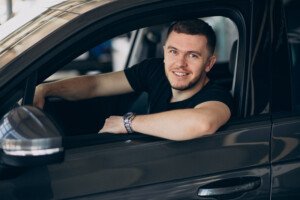 Why is it so hard to JUST SAY NO to a stranger offering a ride? Maybe because the idea of walking sounds uncomfortable? Freepik.com, senivpetro.

These days we hear a lot about how obesity is unhealthy. As a former personal trainer, I will also point out that thinner young adults who never do any kind of structured aerobic exercise or athletics would find briskly walking a mile not exactly comfortable – especially if they smoke.

A documentary on the ID Channel (“Man with a Van: Lucifer”) of the young woman’s 1998 murder did not include any information on the victim’s exercise habits, but the nature of this crime has been replicated countless times over the decades.

• A young woman is walking to a destination at least a mile away, sometimes only half a mile or even less.

• This may be planned or because her car broke down or a ride with a friend never showed up.

• She may or may not be carrying something other than a purse, but usually has only her purse.

• She’s not physically disabled or injured.

• The weather is okay or if it’s chilly she’s dressed appropriately.

• A man, whom she’s never met before, comes along and offers a ride.

• And doggone it, she gets into his car – very willfully, without any force or threats.

• She’s reported missing after that point.

• Not long after, her body is found – as was the case of Dawnia Dacosta.

Just what is going on here?

Why are so many women compelled to get into a car with a total stranger – one who, for all they know, is a terrible driver?

Anyone who’s seriously into fitness will surely wonder if lack of fitness plays a role.

Now, one might argue that women who accept rides from strangers at nighttime may be terrified of walking alone in the dark.

However, many of these situations occur, as mentioned, in broad daylight – even in safe neighborhoods.

Is this because these women are afraid to walk alone in daylight, even in a residential area?

Or is it because walking a mile is tiring to them?

Though youth is a mighty protector against coronary artery disease, chronic heart failure, spinal stenosis and osteoarthritis, it’s also no guarantee of a fit body with stamina.

EVERY BODY needs to exercise.

A sedentary young adult may find it easy to walk a quarter of a mile, but then beyond that point – the sweat starts kicking in; their feet begin aching; maybe their low back starts aching; and overall they just don’t feel very comfortable.

A man comes along and offers a ride. This is too tempting to refuse, and so that young tiring woman gets into his car and seals her fate.

Learn to Effortlessly Walk a Mile!

Keep a spare pair of walking shoes in your vehicle in case you ever get stranded. You’ll walk a mile or more far more efficiently than in heels or sandals.

Walk briskly nonstop at least once a week for a minimum of 30 minutes. If you use a treadmill, do NOT hold on. 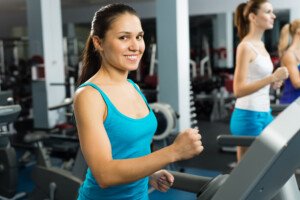 What exactly is “brisk” walking?

A very out-of-shape person might feel that 2.3 mph is brisk, while a fitter (though still sedentary) woman might start feeling worked at 2.7 mph.

However, the rule of thumb is that you’ll want to achieve between 110 and 120 steps per minute — for 30 minutes.

This ability guarantees you’ll have no issues unexpectedly having to walk at least a mile if you’re stranded; you won’t feel a need to take a ride from a stranger.

If at first you can’t sustain this, then do intervals: alternating fast speeds with slower recovery speeds.

If you can’t even walk 2.5 mph for longer than several minutes due to obesity, then do your best several-minutes one training interval at a time: Pump the arms, get winded, then do the slower recovery interval, then repeat, building up to a 30 minute session.

Some young women may think they can easily walk a mile nonstop, but give it a try and see how you feel.

Get used to brisk walking this distance in different weather: hot, windy, rainy, snowy and cold. This way you won’t feel compelled to get inside a stranger’s comfy car.

Survivors of the rapes have been known to say, “Well, he was handsome, seemed nice and was well-dressed, so I thought I was safe.”

But how many of them would have taken that ride had they been physically fit and used to effortlessly walking a mile in any weather?

In this day and age, why are so many women continuing to be so dependent on male strangers?

Get fit and you won’t feel a need to sit in a stranger’s vehicle!