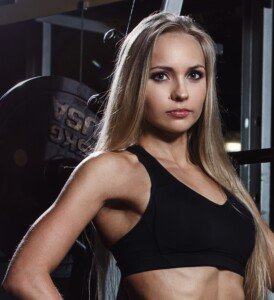 Fed up with people at the gym taking the locker smack next to yours even though there’s a ton other unused lockers?

I finally caught someone red-handed trying to do this.

I’ve been working out for many years at gyms and can’t begin to tell you how eerily often it is that the following will happen:

• I put my belongings in a locker, secure it with a padlock and then go work out.

• At around the midpoint I return to my locker (for a protein drink) and see a lock on the one right next to mine, even though there are dozens and dozens of free lockers.

• Or, when I’m done with the workout and return to my locker, someone’s using the one next to mine – despite a million free lockers.

However, more often than what sheer chance could explain, right as I need to use my locker for my midpoint protein drink or to collect my things at the end of my workout, the woman next to me is using her locker!

Or…as I’m dialing the combination or a split second after I open my locker door, the owner of the lock right next to mine appears out of thin air and wants to get into her locker.

Does this happen to you too?

And what are the odds that at the exact moment you need to get into your locker, the person next to you is either already there or suddenly appears right as you open the door?

Do YOU take lockers right next to other used lockers despite plenty of free lockers available?

Never mind that it’s not a gym violation to take the locker right next to a used one despite dozens of free lockers from which to choose.

There’s a thing called consideration for a stranger’s personal space. With a ton of available lockers, you do NOT need to take the one right next to mine.

One might argue that, due to obsessive compulsive disorder or even Asperger’s syndrome, these gym patrons absolutely need the same locker every single time.

However, there’s two humongous holes in this theory.

First, the frequency that this happens to me does not align with the incidence of OCD and Asperger’s in the general population, which is even less in the gym population. It just happens way too often.

Second, I’ve always suspected that I have a touch of Asperger’s myself, and I’ve always had a little OCD going on, and to be honest, I have favorite lockers at any one of the several clubs I go to that are part of a major chain.

But every so often, they’re taken. What do I do then? I simply take a locker I would never normally take, or a backup favorite choice – and one that’s NOT right next to my favorite that’s already in use.

In fact, I choose one at least several lockers, sometimes a row’s worth, away, sometimes even in a different section of the room.

Why would I take a locker right next to someone else and knowingly encroach upon their personal space?

This is just outright rude and inconsiderate. It’s brazen. Never mind that there’s no gym rule against it.

The obnoxious woman who does this has NO regard for the concept of personal space and is incapable of considering the possibility that the user of the other locker might suddenly appear when she’s there and need some space, especially if the encroacher is the type who spreads her belongings all along the bench.

Though there are far more lockers than bench space, this problem is intensified when two locker users are smack next to each other at the same time.

What are your options?

Normally when the thoughtless woman is either already at her locker when I need to get into mine, and she’s to the right of me where my locker door would open towards, I open its door perpendicular to the wall and even a little past perpendicular.

This lets her know that she has a lot of nerve busting in on my personal space and that I won’t submit to it.

If she’s on my left, the problem isn’t as bad, but I’ve found myself saying at least on several occasions, “What are the odds?”

Now, if she appears after I’ve already opened the door, which is almost always past perpendicular, I’ll pretend I’m not aware she’s there and will not pull that door in.

Of course, there’ve been times when my door was open nearly all the way, and I’d hear, “Excuse me can I get in?” or something like that. In those cases I’ll pull my door in — but stop it at the perpendicular mark.

There’ve also been times when a woman said nothing while working with a very limited space that was partially obstructed by my door.

Call me rude, but these women have it coming for creating a very awkward situation when they had the option of choosing from literally dozens of empty lockers.

It was Sunday late morning. How crowded can a gym be at this time?

There were perhaps three total lockers in use, including mine. I was walking towards mine, holding a second pair of shoes in my left hand.

Below the lockers was a sitting ledge that ran the length of the row of lockers. What I typically do is set my shoes on the ledge, to the left of my locker, and dial the combination.

Literally just as I grabbed the padlock and was about to set my shoes down, doggone it, a woman swoops in from nowhere and proceeds to open the door to the empty locker next to mine on its left, even though (not exaggerating here) there were DOZENS of unused lockers.

The locker that she wanted was not advantageously situated. There was nothing special about it. It was not an end locker.

My locker wasn’t on the end, either. On either side of it were a row of lockers, and above that row was another.

What was this woman thinking?

Before she was able to open the locker door enough to shove her belongings in, I firmly set my shoes down on the ledge, blocking this next locker’s door from opening more than 45 degrees.

She said something brief (which I didn’t catch because I had earplugs jammed in) and then she immediately walked away and took a locker about 10 feet from mine.

I witnessed this from the corner of an eye as I dialed my combination. I went on with my business quite nonchalantly.

When someone takes a locker smack next to yours at a gym despite there being dozens of empty lockers, this actually borders on creepy and needs to stop.