Why Do Old Men Let Their Butts Fly up with Lat Pulldowns? 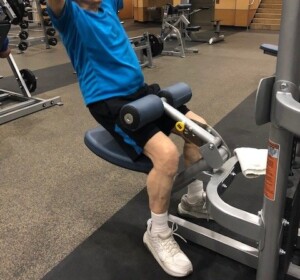 Ever notice that nearly every senior aged man does lat pulldowns by lifting his butt off the seat before each pull?

It’s predictable among this population. However, I don’t mean older men who obviously have been training hard since their younger days.

I’m referring to senior aged men who appear to be either fairly new to strength training, or – if they’ve been strength training for years, they never moved beyond a novice state of training.

Now before I go on, it’s vital to point out that these particular older men are in better shape than they would be if they were not going to the gym at all.

But this doesn’t make the butt-raise right. This habit can lead to stress injuries in the shoulders.

Furthermore, it’s logical to assume that these men want to build muscle and/or strength, and are probably frustrated over why – after all the lat pulldown routines they’ve done – they’re still stuck at the same stack of weights.

Why does it seem that every old man who does lat pulldowns lifts his butt off the seat?

Perhaps this older generation associates more aggressive, whole-body movement — as opposed to more static and controlled movement with just the upper body — with youth and vitality.

However, if they want to get their whole body involved in a strength training movement, they’re much better off with the following: 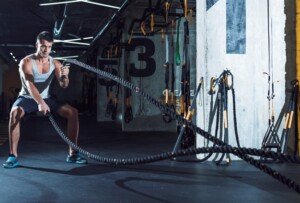 The tire flip and sled pull or push are two additional options for whole-body movement.

But what if whole-body involvement is not what these older men are aiming for? What if it’s just general physical fitness?

Furthermore, it doesn’t optimize the back and arm fitness that the lat pulldown has the potential to do.

And if these men want to build size in their lat muscles or arms, the butt off the seat and yanking approach won’t cut it because this method diffuses or de-isolates muscle recruitment.

To isolate or spread the muscle recruitment thick, one must keep their rump smack on the seat throughout the entire exercise.

#1. The leaning back should not exceed 30 degrees. If your spine angle exceeds 30 degrees, this doesn’t mean you won’t benefit, and in fact, it’s a nice variation when everything else is done correctly.

But this exercise is meant to be done fairly upright, especially since leaning back can result in being accidentally bumped by people walking by.

#3. While your butt is firmly on the seat, pull down the bar, keeping head in neutral position, rather than looking up at the bar (other than initially looking up to grab the bar and make sure your hands are evenly placed).

#4. The bar should end up between chin and top chest height.

#5. Keep your forearms vertical at all times.

#6. With control, release the bar upward. Do not let it fly up. Do not let your butt leave the seat. 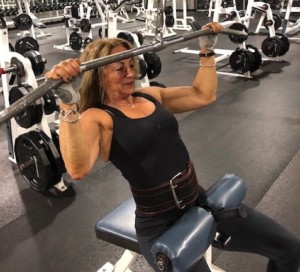 Sharon Smith, 71, keeps her butt firmly on the seat as she pulls down a heavy load.

If you cannot perform the lat pulldown following these guidelines, the weight is too heavy.

Another Reason Old Men Lift Their Butts off the Seat

It’s ego. The more you let your butt go off the seat as the bar is released and then pulled back down, the heavier you can set the resistance.

Some older men want to be seen using a heavy weight load – the pin “way down there.”

What escapes them is that anyone with good knowledge of strength training will clearly see this as full-fledged cheating.

The much heavier weight is being moved partially by the legs. It’s really that simple.

Many more muscles are getting involved, and we all know that the legs have the strongest muscles in the body.

Isn’t it okay for much older people to cheat with strength training?

Actually, the aged population is the LAST population that should cheat when lifting weights.

After all, it’s easier for a 70-year-old shoulder joint to get injured from bad form than is a 30-year-old joint.

What about young bodybuilders yanking down the weight and letting their butts fly up?

At least some of their routine is done correctly. And maybe down the line, they’ll hurt a joint; maybe not. But why take the chance?

Nevertheless, I’ve seen the most extreme butt off the seat maneuvers done by senior aged men who do not have much muscle development. Obviously, it doesn’t work if their goal is to build muscle.

But regardless of the goal or your age, it’s BAD FORM to raise your butt off the seat for the lat pulldown.