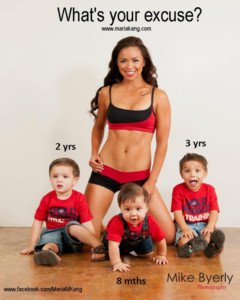 “Fit Mom” Maria Kang apologizes for promoting an “unnatural body standard,” yet if anything’s unnatural, it’s obesity, and this IS being promoted by many body positive influencers.

What’s Actually Unnatural
The human body was not meant to carry a hundred pounds of excess fat, and especially 200 pounds. THIS is what’s unrealistic, not a lean fit body.

The extreme commonality of obesity does not make it normal.

If we were to travel back in time, we’d see that by far, the most unnatural body “type” was that of obesity, even moderate overweight.

This is why generations ago, the “fat lady” in a traveling circus was considered one of the so-called freaks.

The paradigm has brutally shifted, unfortunately. Nowadays, the freak – or “unrealistic” woman’s body – is the trim and toned one.

Okay, she didn’t get this body by accident, but it’s still a lot more realistic than weighing 250 pounds.

Have Americans gotten so lazy and complacent with an unhealthy way of living that being buff and lean is now considered unnatural, even freakish, especially among women?

Maria Kang does not need to apologize for her viral post in 2013 in which she’s looking lean (not scary skinny) and aerobically fit with her two preschoolers and baby.

She’s right: What IS our excuse?

Now if Kang had starved herself to look that way, then this means she was doing things very wrong.

Non-sustainable dieting is NOT necessary to keep a healthy, fit and trim body.

The only thing unnatural about Maria Kang’s body in that post is her breasts, due to implants.

Obesity has now become so normalized that posts such as Maria Kang’s invoke accusations of body shaming, fat shaming and “unrealistic standards.”

They deny it, but the nature of their photos and even captions strongly suggest otherwise.

The unnatural body is the obese one, not the lean and toned one.

It is EXTREMELY UNNATURAL AND UNREALISTIC to be as big as Tess Holliday and many other morbidly obese Instagram stars like Corissa Enneking and Sonalee Rashatwar who – whether they’ve outright admitted it or not – are aggressively pushing the normalization of morbid obesity.

What IS unnatural for the human body?

• Sitting as much as so many Americans do: up to eight hours a day (on the job, in a car, at home watching TV, reading or using a computer).

• Filling up every day on unnatural, sugary high-calorie foods that are literally available at the push of a button.

• America is a fat, sick country that feasts on unhealthy junk foods and spends too much time sitting.

Do not confuse commonality with what’s natural.

Do not equate unrealistic with uncommon.

If we were to go back in time 100 years and show random people a modern-day picture of a very crowded venue, the people of 1919 would be bug-eyed, thinking they were looking at aliens.

That’s because in those photos, there’d be swarms of obese women and men, including morbidly.

It can’t be said too much: The unnatural body is the overweight, especially obese one.

You don’t see an obesity epidemic among other mammals in their natural habitat. The exception is a few species such as bears, but their seasonal fat gain is to get them through months of hibernation.

And please, don’t say that elephants, rhinos and whales are obese. That is their natural makeup, and their size serves a useful purpose in their survival.

We can’t say this about human obesity. A whale or elephant can swim and walk, respectively, for hours.

Few obese people over 40 can walk even one-quarter mile without discomfort and even having to take a rest.

Obese people who regularly do cardio exercise should have no problem walking 400 meters.

It’s so unnatural for bodies to get this way — never mind the commonality. Credit: Sandra Cohen-Rose

• Obesity Is Unnatural Among Humans.
• Being Lean and Sculpted Is Not.

Nobody screams when very overweight body-positive influencers post images and videos of themselves gorging on junk food.

But watch out for all the “fit shaming” when someone like Maria Kang posts a message.

There is nothing unrealistic about all the lean and sculpted moms on Instagram who promote intense weight workouts and high intensity interval training.

They also post their meals: No, not half an apple for lunch, but a FULL plate of nutrient-dense foods. Nothing unrealistic about that.

Please do not equate any of this with the pro-ana (anorexia promotion) movement or with Instagram stars such as Eugenia Cooney – who appears to be 69 pounds soaking wet.

The normalization of obesity needs to stop immediately.