What Does It Mean if You Can’t Rid Trapped Gas? 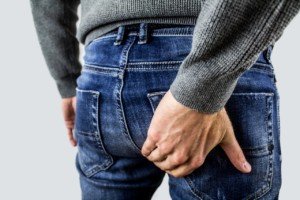 If you keep feeling that you need to fart but can’t, this is no laughing matter. It can mean a tumor.

This sensation may occur from time to time – but then the passing of gas finally comes and there’s relief.

But if the inability to pass gas and thus having trapped gas is a recurring issue, this should be taken as a big heads-up.

“Flatulence, or the passing of gas from below, is an extremely normal part of everyone’s daily existence and results from the normal interaction of bacteria in our intestines and the food that we eat,” says G. Shelton McMullan, MD, board certified gastroenterologist with Capital Digestive Care in MD.

Again, if this is only occasional, and you eventually rid the gas and don’t have any other symptoms, this is probably nothing to worry about.

“The complete inability to release gas is unusual and raises suspicion for the presence of a complete intestinal obstruction of some kind,” says Dr. McMullan.

“A complete intestinal obstruction (a small-bowel obstruction or colonic obstruction) will also typically result in the inability to keep down any food or liquid without vomiting.”

A small-bowel obstruction may be caused by a malignant tumor. But cancer is by far not the most common cause.

Non-Malignant Causes of a Small-Bowel Obstruction

• Volvulus (portion of intestine loops around itself)

Thus, if you believe you’re having difficulty passing gas on a regular basis, you absolutely need to see a doctor.

You yourself will not be able to tell if the problem with ridding gas is originating from an obstruction in the small bowel (small intestines) vs. the large bowel (colon).

“One’s abdomen will usually become distended if a complete bowel obstruction is present, and the person will feel pretty awful in general,” says Dr. McMullan.

“These symptoms should be brought to the attention of a healthcare provider as soon as possible to allow for further evaluation, typically involving an abdominal X-ray at the least.”

Dr. McMullan has published numerous medical abstracts and presented posters related to the management and treatment of inflammatory bowel disease and other gastroenterological conditions.