Why Holding a Treadmill’s Side Rails Behind You Is Bad 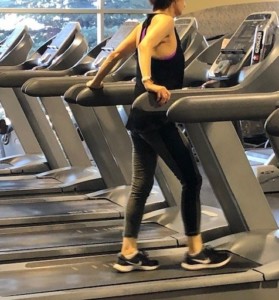 Holding onto the side rails of a treadmill is bad enough, but it’s even worse if your hands are placed behind you. This totally warps the body’s natural walking gait.

But if it’s so bad, why is it comfortable enough for some men and women to sustain this demented style of walking?

If you’ve ever observed someone walking on a treadmill with their hands literally behind them holding the rails, you just might witness them eventually shift their hands to the bar in front.

They may go back and forth, like the woman shown above, who was alternating her hands behind herself and on the front bar.

It’s easy to fatigue the shoulder joints and wrists when holding onto the rail behind you.

However, I also have to wonder why able-bodied people – who have it in their heads that it’s impossible to walk on a treadmill without holding on — don’t just keep their hands on the bar in front or ahead of themselves on the rails.

• Maybe the hands-behind approach feels funky?
• Maybe they think it adds a shoulder workout to the walking?

Hand Placement While Using a Treadmill

Not on the rails. Not on the console. Not on the bar in front. They should be swinging at your side, in rhythm and synch with your hips and legs.

Sure, hold onto the rail or bar for a momentary sip of water or turning around to view something, or hold on for a heart rate.

But then you should let go and resume swinging the arms. The swing need not be exaggerated; make it natural.

Placing the hands on the rail behind you can result in repetitive stress injury to the shoulders, which you wouldn’t necessarily feel at the time of your walking. 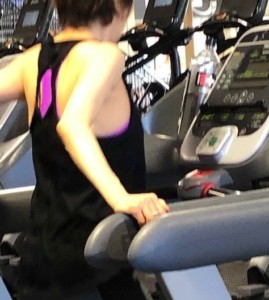 The pain may surface hours later or even a day later, and you’d never make the association of that to your time on the treadmill.

Furthermore, like any kind of hand gripping on the machine, it will also reduce workload, giving you a false sense of “I had a good workout.”

The calorie burn is reduced by about 20 percent (never mind the console’s readout; that’s generated by the settings).

If you don’t care about calorie burn, you should care that any type of holding on means walking below your baseline.

Your body will not get fitter from walking if that walking is being done below baseline (e.g., you’re holding onto something for support).