Holding onto a Treadmill Is Wrong Even with Good Posture 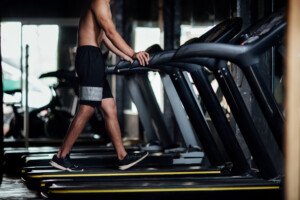 If you make an effort to walk as erect as possible while holding onto a treadmill, there are STILL reasons you should not hold on – even if your posture seems to be perfect throughout the entire session.

And therein lies one of the problems: The odds aren’t exactly in your favor that you’ll be able to maintain good walking posture and form for most of the time, let alone the entire time.

If you’re walking hands-free, you don’t have to think about maintaining good posture, because it will come naturally as your body is forced to stay balanced (which requires good posture) while walking on a moving surface below the feet.

In short, walking without holding onto a treadmill forces the body into good posture, though this won’t correct abnormal curvatures of the spine that create the illusion of poor posture.

Maintaining Correct Posture While Holding onto a Treadmill

Go ahead, try it. See how long you can keep it up, especially at faster speeds.

A tall person who prefers to hold onto the front bar will often lurch forward because their feet are placed relatively far from the front bar. 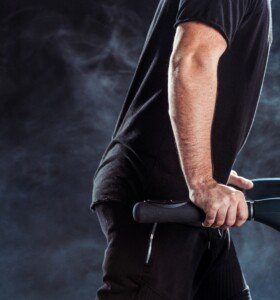 Though such an individual may have a normal spine, it will appear that he (or she) has spinal stenosis, which causes a forward lean when walking anywhere in life.

If the young man above walked that way around the workplace, people would wonder what was wrong with his lower back.

The extra height forces the person to lean forward in order to keep their hands on the front bar.

A shorter person won’t lean in as much. However, if a short person prefers the palms-on-side-rails approach, this will cause the “shoulder bob” which can lead to shoulder pain hours later.

With each step, their shoulders bob up and down, often forward and backward as well, in unnatural motions.

If the distance from their shoulders to the rails allows for straight arms, the walker will be prone to subtracting weight from their body as they move. This promotes a stiff, rather than relaxed, body.

The straightened, often very locked-out arms, will act as sturdy rods, literally pushing the body upward. I call this a light gravity walk.

So even if the walker maintains a vertical body with no hunching, there are still problems with holding onto the treadmill.

I’ve seen very tall men doing the light gravity walk as well, but due to their height, they have the forward lean.

Other Problems with Holding onto a Treadmill Even with Good Posture

• The calorie readout is much inflated because it’s based on the machine settings, not the walker’s physiology. Step off the machine by placing your feet on the platform to straddle the moving tread, and you’ll see that the calorie counter is still counting.

• Holding on locks up the upper body, so even if your body is straight, your hips are still forced to over-rotate, which can lead to hip area pain.

• The foot strike is abnormal.

• And of course, do you really think you can maintain good walking form the entire time?

There will be inevitable posture breaks because holding onto a treadmill promotes bad posture.

Now if you lightly have a few fingers on the side rails, it’ll be easier to maintain good form throughout, but most “grippers” don’t do it this way.

Many are either shoulder bobbers with a palms-pressing-down approach, or have their hands firmly gripping the side rails (during which they may still be shoulder bobbing).

Really, what kind of way is this to walk?

Others like the front bar and will lean forward, mimicking the posture of an old person with spinal stenosis who’s using a walker. This style is by far more common in men than in women.

And then there are the people who place their fingers behind the top of the console, usually during inclines.

These basic ways that people hold onto a treadmill when walking discourage continuous good posture.