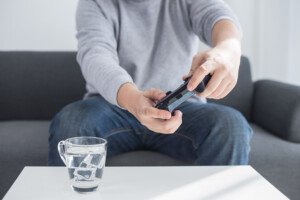 Do you find that nearly every time you sit down to play a video game on your computer, it isn’t long before you can feel the pounding of your heart?

“Your heart can pound with video games similar to your heart pounding when getting ready for an exam or before a sporting competition,” explains Glenn Meininger, MD, Director of Cardiac Electrophysiology Services for the Baltimore region of the MedStar Heart & Vascular Institute.

“Your body reacts to external influences,” says Dr. Meininger. “Sympathetic tone rises with stressors, and your body will release adrenaline, a hormone from the adrenal gland which will impact the heart rate directly.”

In other words, for those who feel a pounding heart whenever they play computer video games, this activity literally simulates attending a suspenseful sporting event.

The body cannot tell the difference between a video game on a computer and an exciting NFL game on the TV (let alone in person) or NBA match.

Even a suspenseful Wimbledon final can make a spectator’s pulse race while watching the event on a TV screen.

If the strong fast pulse worries you, then recognize it for what it is: Your excitement over the computer video game is simulating a “fight or flight” situation, and your body is gearing up for a fight with the perceived “threat” or an escape from it.

This is the same response that would occur if you were running late for an important meeting but were stuck in traffic.

The adrenaline is ramped up as you try to figure out which crawling lane is moving faster, as you cuss at whatever is causing the bottleneck, and wonder how much of the meeting or appointment you’re going to miss.

It’d be the same physiological response of hormones if you were being chased by a person with a knife or pacing the waiting room of a hospital awaiting news of a loved-one’s major surgery.

In fact, the fight or flight response can be evoked simply by opening a letter that you know contains a huge bill.

This “survival” response by the body’s chemical messengers was crucial for primitive man’s success in the natural elements.

However, the modern-day human body is still hardwired to respond this way to stressors, whether they be a wild buffalo charging at you or the visual and auditory stimuli of a computer video game that you’re very involved with.

The pounding heart prepares the body for the physical exertion of fight or flight – even if all you’re doing is pressing buttons on the control console.