Can Sleep Apnea Cause Chest Pain at Night? 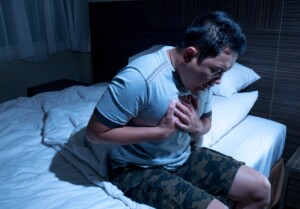 If you’re having chest pain at night in bed, it sure would be more reassuring to know it’s from sleep apnea than a heart attack or heart disease.

Those who’ve never been tested for sleep apnea may by lying there, feeling the pain in their chest, trying to come up with less serious explanations than a bad heart.

One of those that might cross their mind is sleep apnea. It causes immediate symptoms such as gasping for breath overnight, as witnessed by others, as well as being awakened repeatedly by a choking sensation.

“Resulting symptoms during the daytime consist of excessive sleepiness and fatigue.”

In addition to those, the person with untreated OSA may suffer from irritability, impaired concentration and frequent napping that fails to recharge him – or her.

Morning headaches that vanish soon after getting up for the day are another well-documented symptom of untreated sleep apnea.

But can OSA cause chest pain, whether during the day or night?

“Individuals suffering from this disorder are often obese, have high blood pressure and commonly have heart disease,” continues Dr. Tavel.

“Although the heart disease, in itself, may cause chest pain described as angina, the OSA is not associated with this symptom.”

A paper in Mayo Clinic Proceedings (Loui et al, March 1994) describes the case of three obese people who were experiencing chest pain at night (and during the day though less prominently) – along with episodic shortness of breath and perceived heart palpitations.

A sleep study revealed severe OSA in all three of these subjects. But a catheter angiogram of their coronary arteries revealed less obstructive plaque buildup as would be expected for the degree of their reported symptoms.

The study authors could only conclude that when patients report chest pain, their doctor should pursue the possibility of sleep apnea by inquiring if the patient snores and suffers from excessive daytime grogginess.

The authors were not able to definitively affirm that untreated OSA directly causes chest pain.

Remember, the patients were obese and already had plaque buildup. The possibility that acid reflex overnight or during the day, as the cause of the chest pain, was not investigated.

• Untreated OSA is a risk factor for problems with the heart that can cause chest pain: coronary artery disease, chronic heart failure and atrial fibrillation.

• Thus, it wouldn’t be surprising if someone with bouts of nighttime chest pain is found to have both OSA and one of the three cardiac conditions mentioned above.

• Though obesity is a major risk factor for OSA, it’s not the only risk factor. This is why thin people, including women, can have this often misdiagnosed condition.

For example, a naturally small airway, excess pharyngeal tissue and/or large tongue base can cause an obstruction during sleep, when these tissues are very relaxed, leading to apnea.

• The episodes of ceased breathing overnight cause internal disruptions such as reduced blood oxygen and increased heart rate and blood pressure, but these would not cause chest pain.