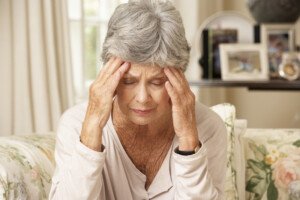 BPPV dizziness can strike out of the blue, but so can the dizziness of a looming heart attack. Is there a way to tell the difference?

BPPV stands for benign paroxysmal positional vertigo. It’s caused by a displacement of “crystals” in the inner ear that are involved with sending signals to the brain.

The little particles are made of calcium carbonate. When they get displaced, the signals get mixed up, causing a person to experience vertigo with movement or change in body position.

The feeling is often described as dizziness. It can come on suddenly, and if severe enough, be accompanied by nausea and even vomiting.

An imminent heart attack can present with any number of symptoms.

• Chest pain, tightness and/or heaviness
• Shortness of breath
• Pain in the shoulder, arm, back or jaw
• Sweating, clammy skin

A heart attack about to come can also make a person feel dizzy as well as nauseous, and even make them vomit.

“For the dizziness of a heart attack, you may feel lightheaded and dizzy, but there’s no vertigo or spinning sensation.”

In mild cases of BPPV, there’s no nausea and of course no upchucking. Even in more severe cases, the person feels fine as long as they’re not moving, and this includes keeping their head still.

If they turn their head, the room will seem to shift just a tiny bit or outright whirl.

The type of dizziness is the kind that one would feel if being spun around in a chair and then stopped.

Even after they’re stopped, they will perceive the room as still whirling about.

It’s also similar to what some people feel after getting off an amusement park ride that went around in circles.

The perceived movement of a room (vertigo) in BPPV may be horizontal, vertical or a fusion of the two.

This is not how the dizziness or lightheadedness of a heart attack will feel. The room won’t seem to be moving. But you’ll feel faint in the head.

BPPV is usually instantly resolved with the Epley maneuver.

If it doesn’t work, this doesn’t mean that your dizziness is being caused by an imminent heart attack.

Even if you have nausea or vomiting, this still doesn’t necessarily mean that a heart attack is near.

The Epley maneuver does not work 100 percent of the time for every single person.

If you’re plagued by the symptoms of feeling dizzy, with or without a spinning sensation, and/or nausea or vomiting, there are many possible causes. See a doctor.