Why Are Some Babies Fat and Some Skinny? 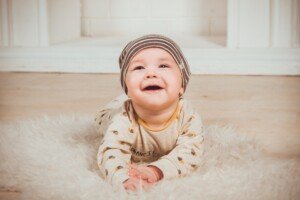 Some babies are fat and tubby while others are skinny and scrawny.

And many fall in between somewhere. What makes one baby fat and the next one thin?

Is it as simple as some babies simply get fed more while others get far fewer calories?

Or maybe some babies have naturally oversized appetites while others get satiated with only small amounts of milk or food?

“Babies are born in all shapes and sizes,” says Joel Gator Warsh, MD, of Integrative Pediatrics and Medicine, Studio City, CA, and part of the pediatric staff of Cedars-Sinai Hospital.

“There is a wide range of normal. Most babies born between 38 and 40 weeks weigh somewhere between 2,500g (five pounds, 8 ounces) and 4,000g (eight pounds, 13 ounces). Outside of this range would be considered small or large for gestational age.”

“There are a number of reasons for fat or skinny babies,” continues Dr. Warsh.

“The most common would be a skinny premature baby or a large post-mature baby.

“There are a number of factors that influence a baby’s size including twin births, maternal infections, toxic exposure and smoking [which can predispose a baby to being skinny]. Maternal diabetes is another common reason for a large baby.”

Medical explanations aside, it’s a simple fact that some moms like to feed their babies more food/milk than they need, while others – for whatever reason – end their babies’ feeding times well before the baby’s hunger is satisfied.

On a collective level, variations in amount of food/milk will affect a baby’s size.

When I was in junior high school, I sat for a baby named Adam. He was on the chubby side.

His mother would instruct me what to feed him for dinner – usually a peanut butter sandwich. I liked watching him eat, and would make him a second sandwich! Adam would gobble it up.

In theory, if his mother did this – feeding him more than what was necessary (one peanut butter sandwich is enough for a baby) – he’d be even plumper, perhaps what would be considered fat.

A pediatrician can determine if your baby is too skinny or overweight, based on age and height.