What Is Transitional Sleep Apnea? 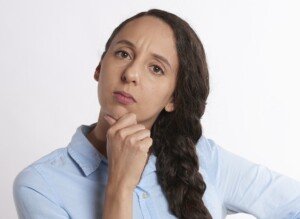 The transitional form of sleep apnea is alarming and frightening, making people think they’ll need a CPAP machine for the rest of their life.

By far the most common form of sleep apnea in general is the obstructive type.

This is why someone with OSA is advised by their treating physician to use CPAP therapy the entire time they’re asleep, as in, the full seven or eight or more hours that they intend on sleeping.

OSA is not the same as transitional sleep apnea.

What exactly is sleep transition apnea?

“The most common form is a type of central sleep apnea due to the regulation of breathing by different mechanisms.

“During wakefulness, behavioral along with chemical mechanisms determine our rate of breathing.

“During our initial stages of sleep, our breathing rate, also known as our respiratory rate, is almost solely tied to the chemical makeup in our blood.

“Specifically, the amount of carbon dioxide circulating in your blood might be too low, so once you fall asleep, your breathing slows down or stops to equilibrate your carbon dioxide levels.”

Eventually the brain detects the building levels of CO2, during which there has not been a breath, and triggers wakefulness.

This is what wakes up the individual.  And because breathing has stopped, the person experiences any number of sensations: choking, gasping, shortness of breath, having held one’s breath, etc.

If they panic, it may be several breaths before normalcy is restored. The individual may even make gasping noises in this panic.

If they don’t panic, one breath will be all that’s necessary to feel normal and fall back asleep again.

Though a person may have both OSA and transitional (or sleep-onset) SA, they operate independent of each other.

Transitional SA is not uncommon, and in fact, is often considered just a normal part of the phenomenon of sleep onset.

As we are beginning to fall asleep, it’s normal for breathing patterns to become irregular.

When we’re awake, we breathe without thinking about it. When we need a little more oxygen during rest, we may yawn or take a deep breath without really realizing it.

As a person begins entering a sleep state, however, this wakefulness drive to take normal as well as compensatory breaths declines – and the person may cease breathing. They certainly won’t yawn when half-asleep.

The result is an increase in the levels of carbon dioxide in the bloodstream.

Since it does not involve an obstruction of the airway, this phenomenon can occur while the individual is in any position: on their back, side, curled up, reclined up, etc.

Some people may over-inhale upon suddenly being aroused by the feeling of lack of air.

You then settle back down and re-enter the transition between wakefulness and sleep – and these central apneas may resume multiple times before you finally get past the transition and are fully asleep.

If you’re in panic mode while trying to get back to sleep, this can make your breathing shallow, resulting in more buildup of carbon dioxide as you enter the transition to sleep.

Thus, it’s very important to relax and avoid feeling anxious or tense when trying to fall back asleep.

A sleep study, which can be conducted at a lab or at your home, will determine how many disordered breathing events you have per hour on average. 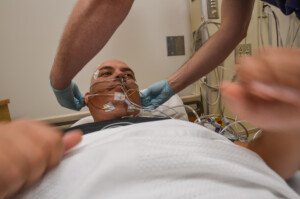 It will also differentiate between disordered breathing events that are caused by an airway obstruction, a central source (brain) which may happen hours into slumber, or a transitional source (brain) at sleep onset.

Dr. Rifkin is the CEO of Ognomy, a virtual OSA practice that remotely connects doctors and patients, providing testing, diagnosis and treatment from one’s home.