Goose Egg on Toddler’s Head: Should You See a Doctor ? 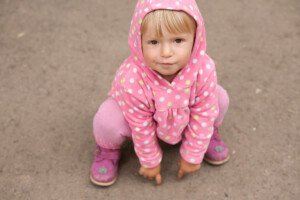 Do you know what to do if you happen to discover a goose egg on your toddler’s head, but you have no idea how it got there?

Obviously, the toddler somehow got hit in the head – either from a fall or possibly a thrown object.

“A goose egg on a toddler’s head is generally nothing to worry about,” says Joel Gator Warsh, MD, of Integrative Pediatrics and Medicine, Studio City, CA, and part of the pediatric staff of Cedars-Sinai Hospital.

The discolored swelling on the scalp is not indicative of a brain injury. In fact, there is no known correlation between size and color of one of these bumps and the presence of bleeding in the brain.

“Falls are common and it is odd to see a toddler in my office without a few bumps and bruises. When they hit their head, it is common to get a bruise/goose egg.”

Rather than focus on the appearance of the goose egg – which isn’t pretty – you should keep a lookout for neurological symptoms in your toddler (or older child).

A new onset of neurological symptoms, that have coincided with the development of the goose egg, is0 what is highly indicative of a brain injury.

First off, that discolored lump is a superficial injury. The scalp is loaded with blood vessels.

If after impact, the veins leak fluid or blood into and under the scalp, the classic goose egg will form. It can take up to a week to go down.

The mistake that some parents make is assuming that the ABSENCE of a goose egg, swelling, bruising, a gash or bleeding rules out the possibility of a brain injury!

Goose Egg or Not, When to Take Toddler to Doctor

“You should see your doctor if you are ever concerned about your child after a head injury,” says Dr. Warsh.

“A minor bump is usually nothing to be worried about though. It generally takes a significant force to cause any internal damage to the head.

“Significant trauma including a car accident, major sports injury or fall greater than five feet onto a hard surface should be evaluated immediately.”

A slip and fall, causing the toddler to fall backwards onto concrete, may also warrant a prompt evaluation, as such a fall can involve a very hard slam.

“Additionally, you should seek medical care for loss of consciousness, vomiting [especially in a projectile] or any concerning neurologic symptom such as wobbly gait or slurred speech,” says Dr. Warsh.

• Increasing drowsiness; does not awaken easily

• Clear fluid leaking from the mouth, nose or ears

• Blood leaking from the mouth, nose or ears

If your toddler exhibits even one of these symptoms, or if the loss of consciousness was only for a few seconds, this nets a visit to the ER.

So rather than worry about the goose egg on your toddler’s head, keep a close eye on any possible development of the aforementioned symptoms in the next 24 hours.

Trust your gut. It certainly wouldn’t hurt to call your pediatrician’s office and inform them of the accident.