Permanent Dent in Arm from Resting It Against Desk 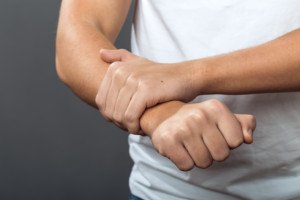 A dent in a limb is often associated with muscle atrophy in the mind of the layperson.

Somehow, someway, perceived or actual dents in the arm or leg have barged their way into the hypochondria realm.

One Benign Cause of Dent in the Arm: Compression into a Desk While Seated

“If you rest your arm or leg against something for a period of time, you may have an indentation,” says J. Mark Anderson, MD, DABFM, of Executive Medicine of Texas and who is board certified in family medicine.

Dr. Anderson explains, “This is common because the fluids move to the side of the impression. It’s normal for the dent to go away in a matter of moments.

“If the indention is deep or if it stays for a period of time, it may mean that there is excessive swelling or too much fluid under the skin.

“This can happen after a salty meal or after taking medications, like anti-inflammatories, that can cause fluid retention. arm dent

“Occasional fluid retention is not serious and can be controlled by a healthy diet and proper hydration.

“Keep in mind that dehydration can also cause indentions and a loss of elasticity in the skin.

“When indentations can be made in the skin, most commonly the legs, just by pressing with the fingers, it’s called pitting edema.”

Don’t panic if the pitting lasts only moments. If it sticks around, this is something to tell your doctor.

“Pitting edema can be a symptom of a more serious issue [such as chronic heart failure or kidney insufficiency] and should be addressed by a healthcare provider.”

Next time you sit at your desk, take note of where the arm with the dent usually is.

For example, is the area of the dent located on the lower side of your outer elbow?

This location is often squeezed between a chair’s armrest and the side of your torso – for prolonged periods as you type.

Does the arm remain sandwiched between your body and an armrest as the other hand freely uses a mouse?

If the dent seems to always be there whether you use a desk or not, or there doesn’t seem to be an offending position that causes the arm dent, it’s possible that the impression is just part of your normal anatomy. The human body is asymmetrical.