Floppy Upper Eyelids that Feel Rubbery: What’s the Cause? 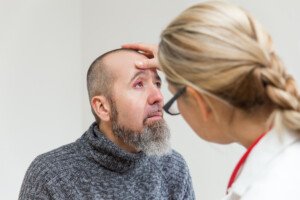 One suspected cause of floppy upper eyelids that feel rubbery is one of the most misdiagnosed and under-diagnosed diseases.

The medical condition that has recently been found to be strongly associated with lax upper eyelids that have a rubbery feel to them is a very common disorder that – though associated with obesity – can occur in skinny people – including young adults.

The condition may be aggravated or caused by obesity, but if a thin person has a naturally small airway, excess tissue in the throat, a large tongue and/or a small jaw … that individual is at risk of having the condition.

A research report that appears in The Ocular Surface (June 2018), co-authored by Charles Bouchard, MD, cites an association between untreated obstructive sleep apnea and the presence of floppy rubbery upper eyelids.

It is estimated that 80 percent of people with sleep apnea have not been diagnosed.

The daytime symptoms easily mimic symptoms of other conditions. For example, a 30-year-old, 130 lb. woman with three children under age five may attribute her persistent daytime fatigue and morning headaches to the stress of taking care of her kids.

Or, her fatigue and headaches may have been misdiagnosed as chronic fatigue syndrome.

Dr. Bouchard is chair of Loyola Medicine’s department of ophthalmology and says that floppy rubbery upper eyelids are found in patients with one of three conditions:

The Loyola study included 35 participants who were suspected of having untreated sleep apnea.

They were evaluated by Loyola sleep specialists via overnight sleep studies.

So the association is definitely there. But the study was not able to explain cause and effect.

One theory is that the floppy eyelids have something to do with low-grade inflammation that leads to a decline in elastin.

Elastin is a protein that gives skin its elastic or springy nature, allowing it to spring back to its original shape after it’s stretched or pulled.

If you gather with fingertips the skin of a very old person and then release, the skin will kind of stay bunched up and only slowly resume its natural position.

In younger people there is no lingering form; the pulled or stretched skin instantly bounces back to its original position.

“Obstructive sleep apnea is a severely underdiagnosed disease,” says the paper, “and without treatment leads to increased morbidity and mortality.”

When only ONE eyelid appears floppy and is droopy, this can be connected to a brain aneurysm or a symptom of a brain tumor.