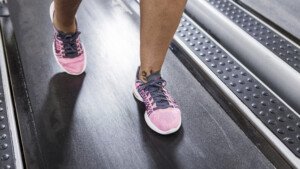 Even the healthiest will eventually die, but a five-minute treadmill test is very accurate at predicting death in the near future.

You’re probably already familiar with the so-called stress test in which a person walks on a treadmill with a gradually increasing incline to make their heart work harder.

Problem is, these tests are time consuming and uncomfortable.

Queen’s University researcher Louise de Lannoy found that her abbreviated treadmill test is predictive of a risk for premature death – similarly to the traditional longer test.

The shorter version is called a submaximal fitness test; the longer is called a maximal test.

• The subjects were followed from 1974 to 2002 for evidence of changes in submaximal test performance over time and how this might be associated with early mortality.

The researchers looked at the subjects’ heart rate at the five-minute mark of their past traditional treadmill tests.

From this value, sCRF was calculated. Overs the years, the change in sCRF from baseline to the follow-ups was divided into three groups:

Again, other variables that raise the risk for early death—such as smoking, diabetes and high blood pressure—were adjusted for.

Nevertheless, the results would be the same if the test were ceased after only five minutes vs. going for 30 minutes with a heart rate evaluation after the first five minutes.

A simple 5-minute submaximal test of CRF identified that adults who maintained or improved sCRF were less likely to die from all causes during follow-up than were adults whose sCRF decreased.

This study, which was published in Mayo Clinic Proceedings (Feb. 2018) is something for physicians to really pay attention to.

Imagine if every primary care physician had a treadmill in their office. The test, taking only five minutes, certainly would not impose upon office time.

Patients would be instructed to bring comfortable footwear. Every year they’d take the test so that serial results could be analyzed to see if there was a downward, stable or upward trend with heart rate at the end of the five minutes.

However, a treadmill in every doctor’s office is not going to happen, as this would be quite costly and require room.

Nevertheless, the concept is intriguing: Telling patients on the spot that they’re at risk for premature death from any cause – even if they don’t smoke, have normal blood pressure, normal cholesterol and don’t have diabetes!