How to Eliminate the Spinach Taste in a Spinach Smoothie 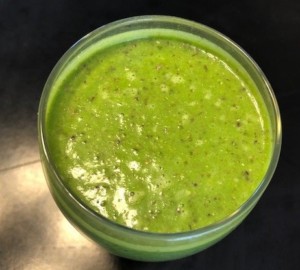 I accidentally discovered a way to greatly blunt the spinach taste in a spinach smoothie despite loads of spinach in the blend!

Recipes for spinach smoothies often call for small amounts of this green superfood because it’s quite unpalatable in liquid form for many people.

But there IS a way to cram a LOT of spinach into a smoothie — in fact, creating a large smoothie that’s virtually ALL spinach — without hardly tasting any of it. No kidding! 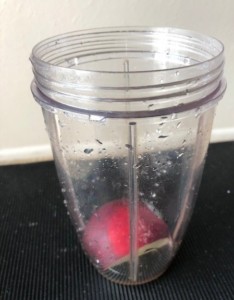 Use a NutriBullet or NutriNinja processor. This recipe will not work with “juicers” or juice extractors.

Place an apple slice or small amount of any other non-leafy produce at the bottom, as depicted in the image above.

This will prevent spinach leaves from sticking to the bottom (which becomes the top when you flip it over to process). 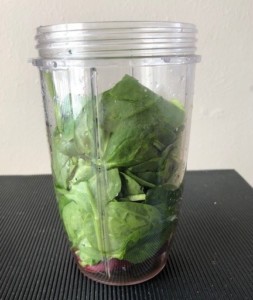 Cram as much spinach as possible up to the black limit line of the container. You can breach this rule a little, as I’ve done here, as I’ve done in the image above.

Don’t just drop in the leaves. Cram and stuff them down with your fingertips so that the volume is compact. Cram as much as possible up to or a little past the black line. Then add a small palm-full of raw almonds. 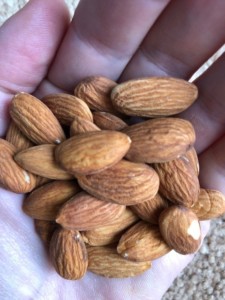 Add water to a little past the black line or marker. Then turn on the NutriBullet or NutriNinja.

Let it grind away for at least 60 seconds. The machine will NOT overheat or malfunction.

You want to be sure to completely pulverize the almonds and leaves. The result will be a rich green color.

I like to pour the contents into a very large glass, like the huge stein shaped glass below. There will be a LOT to drink, due to the required water content.

If you don’t add enough water, the drink will be thick like a shake. If you prefer this, then fine.

But I like to get green smoothie ingestion over as fast as possible, and the only way to accomplish this is to have a thinner drink so that I can easily guzzle a lot in a long breath. 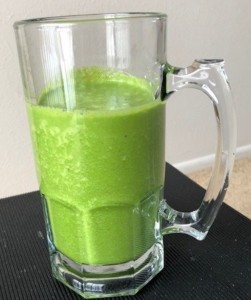 Add one and a half tablespoons of the following to the drink (which can be purchased in ground form): 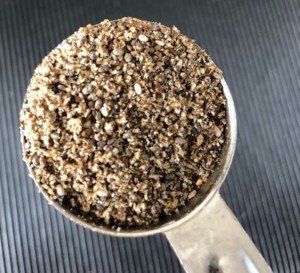 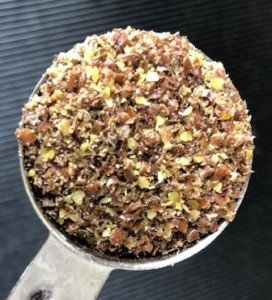 Stir vigorously with an object that reaches the bottom of the glass, such as a butter knife. If it seems too thick (not easily “guzzable”) then add water and stir in. It’s never too late to add more water to thin out the beverage. 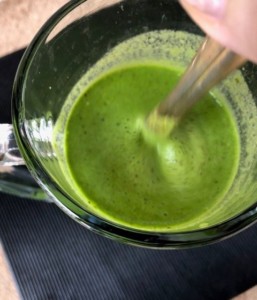 Now I’m not exaggerating when I say this, but you will hardly — and I mean barely, if at ALL — taste the spinach.

So what, then, will you actually taste? First of all, the taste will be highly tolerable. It will totally lack that unpalatable, awful taste of earth and mud that some people describe as the taste of liquified spinach.

Depending on what other produce you put at the bottom (to prevent the leaves from sticking), it will be a bland, weak taste, almost like nothing. If you use grapes instead of an apple, you’ll taste the grapes, not the spinach, and the drink will have more flavor, but it will still be weak.  get rid of

With an apple slice, it will almost be neutral, actually. It will not taste like cardboard or paper. eliminate

Trust me, you will easily tolerate it. You will not have to plug your nose as you drink this spinach smoothie, nor will you dread your next sip or guzzle.

Strangely, it will not taste nutty or seedy. You may detect a vague taste of almonds.

You can now drink large amounts of spinach without ever gagging on the taste ever again!  eliminate nutribullet nutrininja