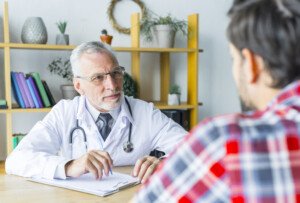 Since millions have undiagnosed obstructive sleep apnea, shouldn’t EVERYONE be screened for OSA, even if they don’t have daytime symptoms?

The danger of not getting the OSA diagnosis could eventually mean serious harm to one’s cardiovascular system.

This may even occur in someone whose OSA is not causing the classic daytime symptoms of sleepiness and fatigue.

Thus, it seemingly makes a lot of sense that some type of OSA screening, or even a screening sleep study (polysomnography), should be urged for every single adult as part of their wellness program – especially since OSA can also affect people of a healthy body weight.

Nevertheless, the U.S. Preventive Service Task Force’s conclusion as of late 2017 is that there just isn’t enough evidence to endorse screening for sleep apnea in adults who do not have symptoms.

How could there not be enough evidence?

“Part of the major reason why we shouldn’t screen for sleep apnea is because we don’t have an adequate test that can be used as a screening tool,” says Daniel Rifkin, MD, a sleep medicine expert at the Sleep Medicine Centers of Western New York.

For example, dentists often see signs that can indicate the presence of obstructive sleep apnea.

These include a small upper airway and crowded teeth that cause indentations in the tongue.

There is some predictive value in these findings when it comes to obstructive sleep apnea, but the prediction isn’t strong enough.

In other words, many people with a narrow upper airway and crowded teeth do not have obstructive sleep apnea.

“In-laboratory polysomnography, although extensive and accurate, is very expensive, and access is limited,” continues Dr. Rifkin.

“More readily available home sleep tests or HSTs are known to be accurate in a patient with a high pre-test probability of having moderate to severe obstructive sleep apnea, but they’re not very good at diagnosing more mild disease.

“Home sleep tests often underestimate disease for a couple of reasons that are mostly due to the absence of the EEG signal measurements of NREM and REM sleep.

“With that said, patients with risk factors of OSA, including obesity, diabetes, high blood pressure and other forms of cardiovascular disease, should be assessed for presence of sleep apnea due to the high prevalence of disease in those cohorts.”

How many people have asymptomatic sleep apnea?

This is not known.

How many people have symptoms of SA but are not aware of this?

This too is not known.

This lack of data is one of the reasons why the USPSTF does not recommend screening for sleep apnea in those who don’t have symptoms.

• Repeatedly waking for no reason

• Waking to urinate at least twice overnight; volume of urine is more than what previous fluid intake would justify.

• Waking with headaches that soon go away

• Easily dozing off while watching TV, doing computer work, reading or being in a car

• High blood pressure that does not respond to drugs, diet or exercise

What about screening with questionnaires?

The USPSTF has determined that questionnaires are inadequate. Patients can be unknowingly subjective to their sleeping and napping habits, and may be in subconscious denial over how easily they fall asleep during the day.

According to the USPSTF, there are no studies supporting the concept of sleep apnea screening for the general population.

Dr. Rifkin is the CEO of Ognomy, a virtual sleep apnea practice that connects physicians and patients remotely, providing testing, diagnosis and treatment from one’s home.