Why Old People First Don’t Hear You, then Suddenly Understand 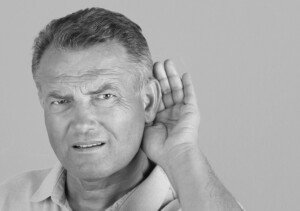 Ever notice that often, when speaking to an elderly person, they ask you to repeat it — but then suddenly they understood everything you said?

Is this hearing loss or a “senior brain” taking a little longer to catch up?

• You know your elderly relative’s hearing aids are working effectively.

• There are times that their hearing even surprises you.

• Yet there are frequent instances in which, after you begin talking in a clear voice, they ask you to repeat it.

• How can this be, since just half an hour ago they were able to hear you perfectly at the same volume in full conversation?

• They say, “It’s my senior brain. It takes longer to process words. I can hear them but my senior brain takes a moment to catch up. So you have to repeat the first few words or sometimes the whole sentence.”

According to a study by University of Maryland Researchers, there’s truth to this explanation.

So when an older person asks, “What? Can you repeat that?” yet you know they have normal hearing, it truly is a senior brain at work.

While the study participants listened to speech, their brains were scanned. They listened to someone talking in both a quiet and noisy environment.

Two areas of the brain were looked at. One was the midbrain, which performs basic processing of any sounds.

The other was the cortex, where higher functioning occurs including the processing of speech.

In the younger participants, the midbrain yielded a signal that correlated to either discerning speech in a quiet environment or speech where there was a noisy background.

In the older subjects, there was degradation of the function…for both the quiet and noisy environment.

This means that for older people, even in a quiet room, their brain has difficulty processing speech.

This explains why my elderly father so often needs me to repeat the first few words of a sentence that I speak out of the blue, even though as the conversation progresses, he could understand my speech even though I’m talking at the same volume.

The auditory cortex of the older participants took longer to process the same information that was listened to by the younger subjects.

The paper states that elderly people need more time to figure out what someone is saying.

For the senior age person, more effort is dedicated to listening—and understanding—speech, even though their hearing is adequate (either naturally or via a hearing aid).

This perhaps explains why an elderly person whom you speak to often, usually can’t “hear” the first few words when you speak.

But then once their senior brain gets going, they seem to hear perfectly.

The study authors point out that the older brain drops part of the speech signal even though the ears captured it well.

I’ve found that with my father, he’s less likely to ask me to repeat the beginning of a sentence if I start out slower than usual — after first getting his attention.

Getting his attention first will warm up the senior brain for the sound signals that are coming.