Five Things Never to Say to Someone with Sleep Apnea 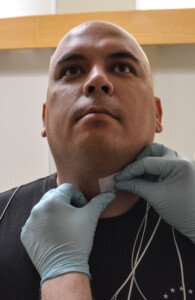 Being prepped for a sleep study.

Here are 5 things that you should never say to someone who has sleep apnea – which, by the way, you yourself might have!

After all, sleep apnea is one of the most underdiagnosed medical conditions. There are countless cases of people who go years with untreated symptoms until finally the correct diagnosis is made.

Things You Should Never Say to Someone with Sleep Apnea

“You’re supposed to be so fit and healthy; how could you have sleep apnea?” This may sound like an innocent question, and actually, it is. But it’s HOW you say it that can make a difference.

This question has the potential to be offensive depending on the relationship of the two people.

When I told my father that I was convinced I had obstructive sleep apnea, he asked me this – but in a tone that was snide and condescending.

So if you want to know how your gym workout warrior family member or friend could possibly have sleep apnea, it’s okay to ask, but don’t be a smart aleck with your tone.

“If you lost weight you wouldn’t have sleep apnea.” Assume that an overweight person who’s been diagnosed with OSA is fully aware that weight loss can improve the situation.

Also assume with 100 percent confidence that weight loss doesn’t cure OSA. In mild cases it can eliminate it. But the improvement isn’t substantial enough to eliminate moderate and especially severe cases.

As one formerly obese female patient said, “I lost all the weight, but not a single ounce in my tongue.”

Weight loss, or being thin, does not prevent the tongue—especially a naturally large tongue—from falling backward onto the windpipe during sleep.

“I think sleep apnea is just another fad disease; you’re being scammed.” If you say this, you’d better produce some compelling evidence.

Chances are pretty high that the person you think is getting scammed has been suffering from daytime symptoms including headaches and persistent sleepiness.

Certainly, SOMETHING is wrong. If a sleep study confirms at least five events of disordered breathing per hour, this nets a diagnosis of obstructive sleep apnea.

Obstructive sleep apnea is easily confirmed and its symptoms cannot be imagined. This includes having to empty one’s bladder repeatedly overnight.

“You got ripped off by the sleep lab; I bet it’s run by a doctor who’s making a lot of money off of sleepy people.” First off, just whom do you think should run a sleep lab—a steakhouse chef?

“I KNEW you had sleep apnea! All these years you kept denying it! Just think of all the damage that’s been done to your body that you could have prevented had you not been so stubborn!”

The patient knows this all too well, and you can safely assume they’re sick with guilt over it. So keep quiet about that and instead, encourage them to move forward with their new nightly routine of CPAP therapy.