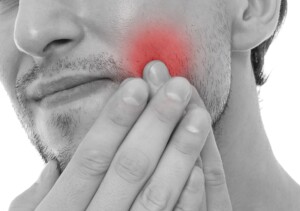 The Journal of the Canadian Chiropractic Association (Jensen et al, 2004) reports a case in which a woman, 50, presented with pain in the left jaw consistent with TMJ disorder.

Sometimes, people with jaw pain will see a chiropractor before they see a dentist.

“Oral cancers should be considered when patients present to a chiropractor with pain in the area of the temporomandibular joint,” says the JCCA report.

Six months after the woman began feeling pain in her jaw, she saw a chiropractor.

During that time the cancer grew. By the time of the visit the jaw pain was extremely severe and radiating to her ear.

It was constant and aggravated by chewing, opening the mouth wide, and lying on her left side.

A month prior to the visit she had begun having difficulty swallowing.

The woman had no idea that all this time, festering way back on the base of her tongue was an ulcerating large cancer.

Instead, she had thought that what portion of the mass she could see was the result of having broken a tooth (her subjective claim) three weeks prior to the visit – believing the tooth had irritated the tongue.

The type of physician to see upon noticing any kind of non-healing wound or ulceration on the tongue is an ear, nose and throat (ENT) doctor.

You may think a dermatologist would be a good choice, but the tongue is a muscle, not skin.

The patient was dead 15 months later.

Now before you panic that your jaw pain is a fatal tongue cancer, there’s much more to this case report.

First off, oral cancer is strongly associated with smoking and drinking. The 50-year-old patient was a one- to two-pack-a-day smoker, and had been smoking since age 16.

She reported being a social drinker. Tmj mimic

The study authors noted that she looked older than her age and had poor dental health.

Based on this data, we will find it exceedingly easy to believe that the patient had a long history of taking very bad care of her body.

Someone who smokes and neglects oral health very most likely does not engage in structured exercise or make a point to have a clean, plant-based diet.

The peripheral arterial disease is a big tip-off that she had unhealthy lifestyle habits.

Think of PAD as heart disease of the leg arteries. The risk factors are the same as with heart disease and include smoking, obesity, high blood pressure and high cholesterol.

Though PAD does not lead to oral cancer, it’s a significant marker for coronary artery disease.

Shortly after the patient underwent surgery to remove the tongue cancer, she had a heart attack, but recovered from that.

Months later a recurrence of the cancer was discovered, but she eventually succumbed to it.

If you’ve never smoked, don’t drink and have a health-giving diet and a strong exercise regimen – and you have jaw pain – there is no reason to lose sleep and fear that it’s cancer mimicking TMJ disorder.

However, don’t wait six months to get it checked out, either. Examine your tongue for signs of lesions, pus or bleeding.