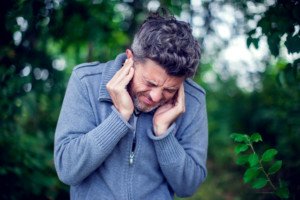 Yes, there’s overlap with the symptoms of labyrinthitis and a brain tumor.

A brain tumor can cause so many more symptoms than what is typically described in pamphlets.

The vast array of symptoms that a brain tumor can cause is why there’s a symptom overlap into so many other conditions — including very benign.

This fact is frustrating to no end for people suffering from health anxiety and even those without HA.

The labyrinth is an inner ear structure that helps control one’s balance.

“Itis” means inflamed, so labyrinthitis is inflammation of this tiny structure.

• Vertigo: sudden sensation of the room spinning or moving, which can make you unsteady on your feet. In severe cases walking is not possible.

• The vertigo can cause nausea and even vomiting.

• Symptom onset is usually sudden—so much so that it’s common for alarmed sufferers to head to an ER or see their doctor the day of the sudden onset.

• After a flash-in-the-pan onset, the symptoms gradually dwindle, but the vertigo can become chronic on a lower scale if there was damage to the vestibular nerve—giving the patient a persistent feeling of feeling not very well.

Labyrinthitis normally resolves on its own, taking several weeks, when caused by a virus (most cases are). When bacteria is a cause, antibiotics can be prescribed.

Now here’s the first problem when it comes to comparing labyrinthitis or vestibular neuritis to a brain tumor:

There is no specific test for diagnosing labyrinthitis. Like the vexing condition of irritable bowel syndrome, the diagnosis is one of exclusion.

Thus, the physician must eliminate differentials or other possible causes of the symptoms.

This includes a brain tumor and even a stroke, side effects of drugs and anxiety.

This is nerve-racking for the patient, because initially, they may have figured that some in-office test would quickly confirm vestibular neuritis.

But they will walk out of the initial doctor’s visit without a confirmed diagnosis of this benign condition, and will still be fearful that “it” might be a brain tumor.

• Trouble walking due to balance issues

• Tinnitus (ringing in the ears)

You’re going to like this: The type of brain tumor that classically causes hearing loss and tinnitus – and may also cause issues with vertigo and balance – is benign! It cannot metastasize.

It’s called acoustic neuroma and can be easily confirmed with an MRI. When it causes troublesome symptoms, there are several options for treatment including transcanal removal.

A common feature of labyrinthitis that is not common in brain tumors is a sudden onset of marked symptoms.

A person with a malignant brain tumor isn’t going to be feeling great all along, then awaken next day with multiple severe symptoms.

Typically, symptoms from a brain tumor are gradual in progression, rather than suddenly you’re vomiting, can’t stay steady on your feet, have trouble seeing and can’t concentrate — all in one big bang.

As for the other overlapping symptoms, there’s no way around it: Brain tumors are notorious for causing nausea, vomiting and of course, visual disturbances and trouble concentrating.

A thorough workup is required to uncover the causes of these symptoms.

If the patient is experiencing all or even most of them, there’s an increased possibility that two conditions – unrelated to each other – are present.