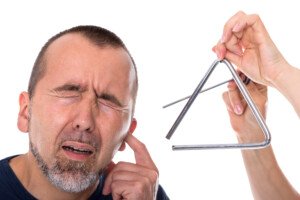 Subjective tinnitus is when you “hear” noise inside your ears and has a large number of potential causes.

Be very careful about how you interpret other websites listing “high blood pressure” as a “cause” of tinnitus.

A direct cause of a symptom is not the same as an agent that makes a pre-existing symptom more noticeable or worse.

On the mayoclinic.com site for tinnitus, under the main header of “Causes,” there is a sub-header titled “Blood vessel disorders linked to tinnitus.”

The term “linked” does not mean causative.

The site further explains as follows: Hypertension and factors that increase blood pressure, such as stress, alcohol and caffeine, can make tinnitus more noticeable.

Thus, while high blood pressure is not a direct cause of tinnitus, it can make you notice it more.

“There is no evidence that high blood pressure alone can cause tinnitus,” says William Manger, MD, PhD, founder of the National Hypertension Association, professor emeritus at the New York School of Medicine, and author of the book, “Live Longer, Live Better: Avoid the Risks.”

Tinnitus, which is very common, is a symptom, not a disease.

“Tinnitus is usually associated with a loss of hearing caused by a variety of conditions,” says Dr. Manger.

The American Tinnitus Association lists the following “catalysts” of tinnitus:

• Loose hair from the ear canal

• Foreign objects or dirt in the ear

• Side effects of some drugs

You may learn that you have high blood pressure at about the same time that you develop tinnitus or notice some kind of ongoing hissing or very high frequency tone in your ears.

This establishes duality of conditions, not cause and effect.

Dr. Manger, who began practicing medicine in 1949, has conducted research on the mechanism of salt-induced hypertension, and has published research in peer-reviewed journals.