Can Asymmetrical Tonsils Mean Cancer? One’s Bigger than the Other 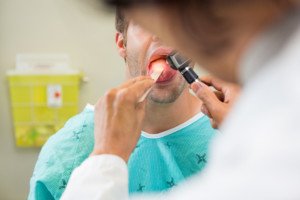 Unfortunately, asymmetry IS associated with a higher chance of cancer in tonsils, according to one study.

If only one tonsil is abnormally large, it should be removed, recommends a study in the Ear, Nose & Throat Journal (Oluwasanmi et al, 2006).

The paper states, “An abnormally large tonsil may be a sign of malignancy.”

The study involved 87 patients for which one tonsil was bigger than the other, but other than that, the tonsils looked normal.

The patients had no pre-existing risk factors for cancer (e.g., prior radiation exposure as treatment for a cancer in the past)

• 87 patients with uneven tonsils were examined.

• Two cases of tonsil cancer were found, both related to lymphoma.

• Neither had a history of a recurrent tonsillitis.

“We believe that although the incidence of cancer in our series was small, it is significant,” says the paper. “We recommend routine excision of abnormally large tonsils.”

The paper further emphasizes the importance of informing the patient of the risk/benefit ratio of tonsil removal that’s done solely due to asymmetry.

This study (Cinar et al) sought to find out the incidence of cancer in people who had asymmetrical tonsils: one tonsil bigger than the other but no other symptoms such as throat soreness.

As in the first study mentioned, the study authors here made sure to exclude patients who had a pre-existing significant risk for cancer.

• 53 patients had one tonsil clinically bigger than the other.

• 51 patients were in a control group (tonsils nearly the same size, though there were variations if size difference, but not enough to be considered asymmetrical).

• In the asymmetric group, 58 percent of the specimens contained benign enlargement of lymphoid tissue in response to bacteria.

• In the control group the percentage was almost 55 percent.

• No cancer was found in either group.

The paper concludes that asymmetric tonsils may occur in people “with an otherwise normal physical examination, secondary to anatomical factors” or the benign response to bacteria.

One tonsil being bigger than the other, then, in and of itself, does not indicate cancer.

However, if one tonsil is bigger than the other, and there are other signs, the uneven size would then become more meaningful:

• Odd-looking appearance of the larger tonsil

• Larger tonsil has been increasing in size

• Enlarged lymph nodes in the neck

• One study reveals two malignancies out of 87 cases of asymmetric tonsils.

• Another study reveals no cancer out of 52 cases of asymmetric tonsils.

• This begs the question: What if the second study had involved 35 more cases of uneven tonsil size?

Another point to consider is the possibility that it only seems as though your tonsils are uneven.

“Most tonsils are visually not symmetric in shape or size,” says Dr. Stacey Silvers, MD, of Madison ENT & Facial Plastic Surgery in NYC, who is board certified in otolaryngology.

Dr. Silvers continues, “Often, part of one tonsil is hidden or deeper in the oropharynx and cannot be fully visualized.

“Often on removal, if necessary, the tonsil size is found to be the same.  Gross asymmetry and irregularly may be more concerning, as lymphoma and other types of cancers may be found in the tonsils.

If one of your tonsils is bigger than the other — or seems that way — have an ear, nose and throat doctor examine them.