Can Anxiety During an EKG Prolong the QT Interval? 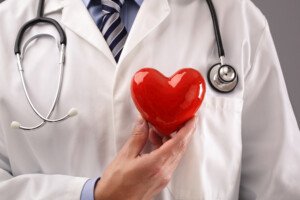 If your focus of health anxiety is long QT syndrome, you should know that anxiety during an EKG can prolong the QT interval.

Medical tests that show an instant result — right there in the office — can leave a person who suffers from health anxiety literally trembling during the test.

Tests noted for an instant result include:

• EKG (of course! How long does it take for the nurse to hand the strip over to the doctor in the next room?)

As you already know, a state of anxiety will drive up the heart rate, and in some people, frequently cause “palpitations” or the sensation of delayed or skipped heartbeats.

So it really shouldn’t be a surprise that the QTc can be thrown off while the patient is lying on the exam table with 12 leads stuck onto their skin, knowing that all sorts of information about their heart will be collected in the next eight seconds.

A study that appears in Psychiatry and Clinical Neurosciences (2008) by Takimoto et al looked at the phenomenon of QT interval prolongation and people with eating disorders.

You may already know that anorexia nervosa and bulimia are often cited as risk factors for acquired long QT syndrome.

This is commonly believed to be due to electrolyte imbalances caused by the eating disorder.

However, abnormal QT intervals are also found in eating disorder patients who have normal electrolyte levels.

So obviously, something else is going on here. Takimoto et al discovered a correlation between the anxiety levels of these patients and their QT intervals.

The paper states, “In the present study, anxiety was also shown to be associated with QT interval and QT dispersion in BN patients.”

The paper continues, “It has been reported that anxiety can change autonomic control, and that anxiety influences the QT dispersion in hypertensive patients and normotensive subjects.”

This study result really needs to be taken with a grain of salt, because it triggers some compelling data:

• Anxiety over the actual EKG test is not the same as the more persistent anxiety that those with serious eating disorders experience.

• Not all of the patients in this study had abnormal QT intervals.

• In those with anorexia nervosa, shrunken heart tissue from malnutrition plays a bigger role in QT prolongation than does mood disturbance.

The study had limitations including the possibility that some of the participants were on medications even though the study called for patients not on any drugs; prescription drugs can prolong the QT interval.

Other variables that can influence QT interval such as magnesium and blood sugar levels were not measured.

So what to do?

Try to relax as much as possible during your next EKG. This is a hefty request for a person suffering from cardiac-related health anxiety.

But maybe you’ll feel more at ease if you consider some factors:

• If your doctor relies on the Bazett formula for computing QTc, know that this formula tends to overestimate the QTc the higher the heart rate during the EKG – and anxiety increases heart rate.

• The older you are, the less likely you have congenital long QT syndrome – assuming you’ve made it this far in life without any fainting episodes, let alone cardiac arrests. 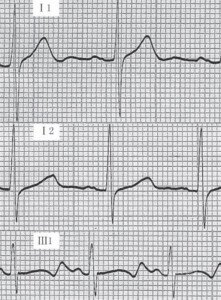 • Remind yourself that things are looking good if no family or extended family members have ever suffered fainting episodes, cardiac arrests, sudden unexpected deaths or unexplained drownings – as these events are indicators of a familial congenital LQTS.

• Remind yourself that you are especially at exceptionally low risk for having congenital long QT syndrome if you’ve been exercising intensely for years without incident.

• The likelihood that you have acquired long QT syndrome is ridiculously low if you’re not on medications, don’t have anorexia or bulimia nervosa, don’t have low thyroid, heart disease or heart failure.

This all begs the question:

Can anxiety – either free-floating (ongoing for no apparent reason) or situational (due to intrusive thoughts or specific circumstances such as driving to work or having an EKG done) – actually cause acquired long QT syndrome?