Can Borderline QT Prolongation Be Caused By Computer Error? 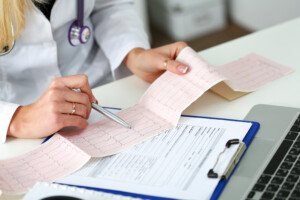 Before you panic when your cardiologist points out that your EKG shows a prolonged QT interval or “borderline QTc interval,” first ask your doctor if the EKG results were determined the old-fashioned way rather than by a computer.

I asked an esteemed electrophysiologist (heart rhythm doctor) if a computer error could miscalculate the QTc and yield an abnormal result suggestive of a long QT interval.

Or rather, it should be manually measured. For example, an HMO system that schedules the highest number of cardiology appointments possible in a given day will likely rely upon a computer to calculate QT interval.

The computer calculation takes a lot faster than the manual version. This allows more patients to be squeezed in.

Dr. Natale adds, “Lead misplacement can result in a false positive. Additionally, the software can read the interval incorrectly when the T wave is relatively smaller.”

So what should you do if your doctor says, “I see that your QTc is abnormally prolonged”?

Well first of all, your doctor will want to get your electrolytes checked. Electrolyte deficiency can prolong the QT interval.

The cardiologist will review your meds if you’re on any, as certain medications can prolong the QT interval.

In my case, when I saw a cardiologist for a routine heart wellness exam, a lead misplacement was the apparent reason for the computer printout stating, “Borderline prolonged QTc interval.”

At the time, I knew nothing about QT intervals. I asked what this could potentially mean.

My doctor said it could mean possible fainting or ventricular fibrillation (which I knew). I couldn’t believe what I was hearing.

He knew I wasn’t on meds, wasn’t anorexic (a potential cause of long QT interval), and didn’t have hypothyroidism or heart disease (two more possible causes).

Yet he never mentioned the possibility of computer error or lead misplacement! Ironically, I was to learn that several past EKGs never yielded this odd result.

Three days later I had a repeat EKG with a different nurse, and I noticed that this nurse didn’t place a lead on my foot as did the previous one.

In fact, I realized right then and there that nobody had ever placed a lead on my foot except the nurse before this one.

Needless to say, the QT interval on the repeat EKG turned out normal.

Don’t panic if your computer-generated EKG spits out a QT prolongation finding – especially if you’ve done enough intense exercise over the past 20 years to have had a thousand cardiac arrests if you DID have long QT syndrome!

Genetic long QT syndrome is rare, but quite typically, when someone is diagnosed, they’ve had a history of fainting. However, in some cases the first symptom is cardiac arrest.

But then again, almost always, the patient knows of immediate and extended family members who either have a history of unexplained fainting or sudden unexplained death.

If you don’t have any risk factors for acquired long QT syndrome (e.g., anorexia nervosa or use of drugs such as antidepressants and antihistamines); have no family history of fainting or sudden cardiac arrest episodes; and have been a gym rat for many years without incident – and your computer EKG comes back positive for QT prolongation – do not panic, and request a manual calculation.

“Computer-derived measurements are fraught with errors, particularly in patients with complex T-wave and U-wave arrangements,” states a report in The British Journal of Sports Medicine (Johnson et al, March 2014).

The BJSM report continues, “As such, physicians-in-training should be taught that the computer’s QTc cannot be relied upon when a diagnosis of LQTS is in question and, must be verified manually.”