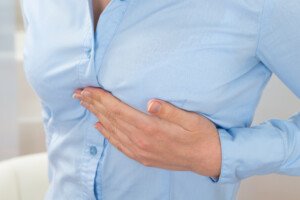 As life-threatening as breast cancer is, this does not mean you should assume that a sharp stabbing pain under your breast is cancer.

In fact, if only cancer COULD always let its presence be known by causing sharp stabbing pain beneath the breast during its early stages, there’d be far more early diagnoses—which would mean far fewer late-stage diagnoses.

Definitely, any stabbing or sharp pain under a breast, even if very brief for a few seconds, will alarm a woman, making her think, “Could this be cancer?”

“We become more concerned if there is pain and tenderness that persists over several weeks or longer,” continues Dr. Citrin.

“If the pain lasts longer than one menstrual cycle or if a woman has any complaints that she cannot explain and are significant, I recommend she seek medical attention.”

A very possible cause of sudden sharp or stabbing pains under the breast—which last only briefly but may occur multiple times throughout the day—is forceful direct contact with the breast area by an external object.

An example would be an overly aggressive self-exam, in which one’s fingers are repeatedly pulling and pressing hard into the skin.

Another example is when an arm is pressed into the side of the breast due to a cramped space, such as when sleeping on a couch, in which the arm is wedged between the breast and the couch.

I once experienced very brief shooting sharp pain under my right breast, and it wasn’t long before I realized it was in the same spot that my upper arm had been pressing upon when I had my arm against it so that my fingers could massage my opposite elbow to relieve tendonitis.

Upon this realization I immediately ceased this positioning, and the pain quickly went away.

Then a few days later I inadvertently returned to the positioning to massage the elbow, realizing this mistake after five minutes.

But that was enough to result in sudden sharp pain (lasting only one or two seconds) under the breast later that night.

I halted the positioning again and the pain disappeared—and has not come back. And this was several years ago.

Tissue under the skin of the breast is very sensitive, which is why for some women, jogging without very firm support results in pain later on.

If you’ve been experiencing sudden-onset very sharp pain under a breast that lasts only seconds and comes and goes throughout the day, take stock of your recent body positions before you jump to the conclusion that the cause is cancer.

• Were you on a plane recently, squeezed against someone next to you?
• How about an amusement park ride that forced your upper arm into your breast?

Cancer is not notorious for causing brief, seconds-long stabbing pains under a breast.

However, like Dr. Citrin pointed out, if any pain persists despite elimination of possible benign causes which include muscle spasms…see a gynecologist. Don’t hesitate to request an ultrasound.

Dr. Citrin, board certified in medical oncology with 30+ years’ experience, devotes his practice exclusively to patients with breast cancer. He is the author of “Knowledge is Power: What Every Woman Should Know About Breast Cancer.”