Causes of Unilateral Tinnitus Other than Acoustic Neuroma 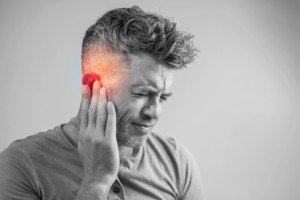 Acoustic neuroma is diagnosed at the rate of one out of about every thousand cases of unilateral (one-sided) tinnitus.

But the causes of the remaining 999 cases are not as varied as you may believe.

Usually, the phenomenon of “ringing in the ears” — hissing, buzzing, crackling or a steady high-frequency tone that’s heard only by the patient and not the examining physician — occurs in both ears, although one side may be noticeably louder or more prominent than the other.

And when tinnitus is unilateral, this is always a cause for concern – simply because an acoustic neuroma, though very rare, is hallmarked by unilateral tinnitus, especially if it’s accompanied by a loss of hearing. 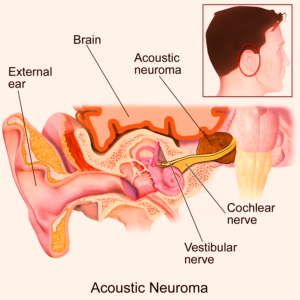 Causes of Tinnitus on One Side Other than Acoustic Neuroma

“Whichever ear has more hearing loss will have the tinnitus. This occurs frequently in patients who have asymmetric hearing loss as a result of noise damage where one ear is exposed to more noise than the other.

“It can also occur in people with sudden hearing loss or Ménière’s disease/migraine where only one ear is involved.” 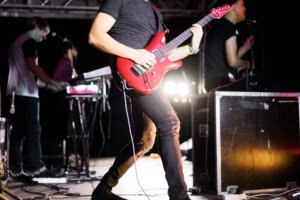 The louder the noise, the less exposure time exponentially is needed for permanent nerve damage to occur. And this causes hearing loss.

One example of a circumstance in which one ear suffers more hearing loss than the other due to asymmetrical sound exposure would be at a workplace where there is loud machinery.

Sensorineural hearing loss is primarily caused by loud sounds. Another cause is older age.

And the hearing impairment from an acoustic neuroma falls under the category of sensorineural.

Conductive hearing loss may be caused by earwax buildup, fluid in the middle ear or abnormalities of the inner ear bones. It can be unilateral but is usually bilateral.

All of the aforementioned causes of hearing loss can lead to tinnitus.

The so-called ringing or buzzing can also be caused by the side effects of many medications, thyroid problems, multiple sclerosis, vitamin B12 deficiency, fibromyalgia, anxiety, depression, diabetes, anemia, TMJ disorder and head injury.

If you have unilateral hearing loss, even if it seems to be sudden, accompanied by tinnitus, this is suspicious for acoustic neuroma; but remind yourself that the math is encouraging:

One out of 1,000 cases of one-sided tinnitus actually turn out to be this benign, slow growing tumor.