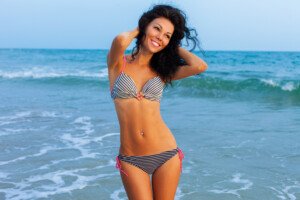 Some say small bones, particularly the thin woman herself, while others would argue it has everything to do with calories in vs. calories out.

Calories in vs. Calories Out

I’d tell clients that the common denominator, know matter what a person’s genetics, diet, bone structure or exercise habits are, is this:

This very simplistic equation is determined by all of those other factors that some other fitness experts insist are more important:

• Diet: what a woman eats, when and how much

• Genetics: Does fast metabolism run in the family?

• Hormonal environment: The hormonal picture in a woman can influence metabolism.

But when all of those bullet points are stripped away, it still all comes down to calories in vs. calories out.

A woman is never thin simply because she has small bones. If you believe otherwise, ask yourself what would happen if something slowed down her metabolism, especially if she coincided that by increasing her caloric intake. And what if she stopped exercising? 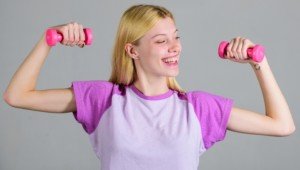 A woman with small bones may very well be taking in more calories than she’s burning off. The equation may be this way for several reasons including:

• Stress: drives her to eat way more than she should.

This woman with small bones will gain fat and become bigger as a result.

Small bones do not make a woman thin.

A small boned woman may have the biggest appetite in the West and not exercise, along with having an average metabolism.

What do you think she’ll look like, with those three factors in place? She will be fat or overweight.

If she diets and exercises and loses the 50 extra pounds of fat and can fit into a size 6, does this mean her bones shrunk?

Now let’s take a large boned woman who practices portion control, has a fast metabolism and works out. She’s going to be lean.

Her larger bone structure has NO influence on her resting metabolism.

• Hormonal environment inside her body

A large bone structure does not cause a woman to be big or husky. Have you not seen “before” images of husky women who then lost fat and gained lean muscle tissue (via diet and exercise), and in their “after” picture they are enviably lean and toned?

Bone size is not relevant.

Thin women who tell you they’re skinny due to small bones are perhaps trying to divert your attention away from suspecting an eating disorder.

This is akin to overweight women telling you they are “big boned” so that you don’t think they have out-of-control eating habits or are lazy.

There are additional ways to gauge whether a woman has small or bigger bones, but the amount of body fat is not one of them! Low muscle mass + low body fat = skinny.