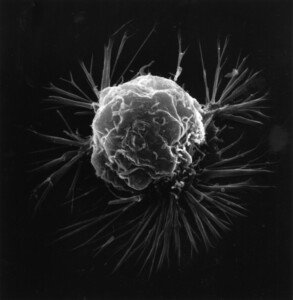 When cancer cells spread, it’s called metastases, and there is currently no effective treatment, even though some cancer patients are deemed “cured” by their medical team.

Now, in theory, the cure for cancer – meaning, an application that destroys cancer 100 percent of the time in every patient who has this disease – would be a drug that inhibits an enzyme called telomerase.

The drug would belong to a class of drugs called telomerase inhibitors and be a universal cancer cure.

The drug would “know” which cells are cancerous and which are normal (since normal cells DO have telomerase activity) and deactivate this enzyme only in the abnormal cells.

It looks great on paper but is far from reality. However…

A new discovery has been reported in Proceedings of the National Academy of Sciences (summer 2017).

Scientists are a big step closer to figuring out a way to stop cancer cells from spreading.

Ever see an image of a cancer cell highly magnified? They have tentacle-like protrusions and simply look hideous.

These tentacles perform the function that they appear to do: They help the cancer cell move, which leads to the spreading.

How about if scientists impair these tentacles, crippling the abnormal cell mobility? That’s what Mostafa El-Sayed and his research team achieved.

Normal cells have these structures, actually, but cancer cells have them in excess – and this allows them to migrate or metastasize.

Professor El-Sayed and his team used nanorods to cripple the leg-like structures. A “nano” refers to one-billionth of a meter – we’re talking really small here.

The extremely tiny rods were coated with molecules called RGD peptides, making them attach to a type of protein called integrin.

This attachment disrupted the integrin, disabling its ability to produce excessive amounts of the filopodia and lamellipodia.

Think of this as interference with a cancer cell’s ability to grow tentacles that get it around.

Professor El-Sayed’s research demonstrated that when nanorods attach to integrin, it causes a delay in the migration of cancer cells.

“There are certain, specific integrins that are overproduced in cancerous cells,” points out Moustafa Ali in the report. “And you don’t find them so much in healthy cells,” continues Ali, one of the study authors.

The experiment didn’t end there. The nanorods were heated, which enhanced their ability to halt the migration.

What would actual treatment involve?
Direct, local injections of the nanorods, heated up with the near-infrared laser.

This begs the question: If the tumor is then rendered “immobile” by the local injection, and hence, cannot spread, what about the possibility that prior to the injection some cancer cells had already gotten away and are already setting up real estate elsewhere in the body?

The nanotechnology would prevent a tumor at the injection site from spreading, but not necessarily before a few renegade cells had already migrated.

The earlier in the cancer’s development that an injection is made, the more likely it will be made before any abnormal cells had a chance to break loose.

As for those renegade cells that can be anywhere in the body at a subclinical level, poised to grow prolifically over time and eventually kill the patient, this is where that telomerase inhibitor drug would come in. If only scientists could develop this!