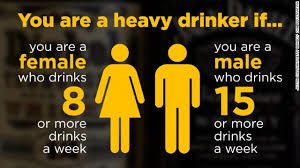 Hey, if you think you’re giving your liver a free pass on damage because you “only” binge drink instead of regular heavy drinking, you are so very mistaken!

The damage that drinking alcohol does to the liver is called alcoholic liver disease (whether you think you have a drinking problem or not).

Most heavy drinkers—those who regularly or routinely consume a lot of liquor—develop a fatty liver (alcoholic liver disease).

In many cases there are no symptoms, but it can progress to an inflammatory state, fibrosis and even cell death. ALD can kill you.

This is what’s meant when someone says, “He died of liver disease from drinking.”

Researchers at University of California, San Francisco, did a study using rodents – and yes, the mice model in research can be extrapolated to apply to humans.

• Limited episodes of binge drinking disrupted liver function. Any disruption in the liver can pave the way for serious liver damage.

• These findings are very important, as they point to multiple aspects of early problems with function in human livers—and this includes ALD.

Okay, so you’re not a mouse. Stop telling yourself this in an attempt to discredit the findings of this study.

Let’s use common sense, not science. It simply stands to reason, to logic, that exposing your liver to periodic episodes of binge drinking is just plain bad. Heavy drinking does not have to be done on a regular basis in order to cause damage to the human body.