Back & Low Stomach Pain, Constipation in Elderly: Could Be? 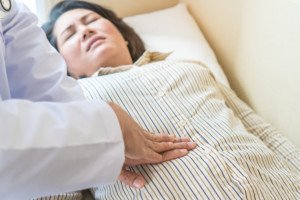 Do you know an elderly person who’s complaining of an “inner tube” of pain around the trunk, mostly in the back, a little in the stomach, + constipation?

An emergency room physician’s assistant examined my elderly father who’d been complaining of really bad back pain (worse than it usually was).

In addition to the back pain he was having stomach pain. He described the experience as an inner tube going around from back to front, with most of the discomfort in the back.

Some pain was along the sides where the kidneys were, and a minority of pain was in the lower abdominal area.

He’d already had scheduled an appointment with his primary care physician, but the morning before, he called me; wanted me to take him to the emergency room.

The pain was THAT bad. Normally he tolerates a lot of pain, but this must have been really bad.

I had asked if there’d been other symptoms and he said no, though he did complain of several bouts of constipation in the week to two weeks prior that he’d said had resolved.

Back and Stomach Pain Complaints in an Elderly Person

The nurse suspected kidney stones. The PA mentioned the possibility of something involving the soft tissue in the back.

She said that this can actually radiate pain to the front. However, an MRI is the better imaging tool to look for musculoskeletal problems.

• Blood was normal.
• Creatinine (kidney function) was elevated, but this was attributed to dehydration.
• Urine sample was normal, no sign of urinary tract or kidney infection.
• CT scan was normal.
• Diverticulitis was ruled out.
• Digital rectal exam was normal.

The ER visit ruled out organ problems, or, to put it another way, was able to tell us what the situation WASN’T.

But we left without a diagnosis, suspecting a musculoskeletal problem. The pain was really bad.

• Palpation this time revealed tenderness or discomfort in the lower left abdominal area.
• A digital rectal exam and urinalysis will not detect a rectal infection.
• A rectal infection can cause constipation and discomfort with bowel movements.
• A fever is NOT always present.

The doctor had asked about constipation and discomfort with bowel movements, and my father confirmed this – even though he did not mention it when I had asked if there’d been other symptoms along with the back and stomach pain.

As mentioned, the constipation had seemingly cleared up a week prior.

Why can a rectal infection cause pain to radiate to the back?

Contributing to this is the way the colon is configured on the left side of the abdomen.

An infection in that region (rectum) could fire the nerve endings that, unlike the right side of the colon, can set off pain that’s felt in a person’s back.

There was no actual test for a rectal infection, but it was the diagnosis based on ruling everything out with the ER tests and office exam and questions.

My father was prescribed a 10 day supply of two antibiotics.

MANY conditions can cause the duo of back and abdominal pain in the elderly (and younger). When you toss in a third symptom—constipation—you are still left with a multitude of possibilities.

It’s crucial to get a diagnosis in an elderly person with unusual or new-onset back and stomach pain, especially with constipation (even if it seems to have cleared up). An untreated infection can be fatal.

Dr. Honaker has been recognized by D Magazine as one of the Best Doctors in Dallas several times and a Texas Super Doctor by Texas Weekly. He’s also a recipient of the Physician Recognition Award from the American Medical Association multiple times.