Is It True that Most Women in Any Yoga Class Are Skinny? 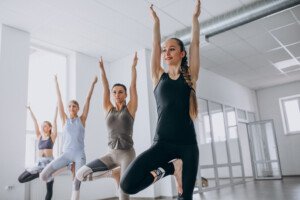 Where on earth did this absurd idea originate that yoga classes are full of skinny women? I was inspired to cover this myth after reading an article about a plus-size yogi.

In her article was a quote that went something like this, in reference to yoga classes: “Half the class has an eating disorder and the other half are gymnasts.”

Nothing could be further from the truth.

I’ll admit that it’s rare to see a full-figured woman or “fat” man in a yoga class. But this doesn’t mean that the participants, collectively, each weigh 105 pounds.

In my first class the woman next to me was very large; she’d be considered fat.

In my second class I noticed a woman with anorexia nervosa. She must have been 78 pounds soaking wet. I am not exaggerating.

She looked like one of those anorexic women you see pictured in reports on eating disorders. I was disgusted that anyone could allow that to happen to themselves.

Being malnourished will undermine one’s ability to perform their best yoga. So to ascribe an “eating disorder” to half the class is just plain ridiculous.

Don’t base your perception on the models whom photographers choose for their images.

It’s no coincidence that some (not all) models who look undernourished are never photographed in advanced poses!

A weak scrawny body is not compatible with advanced yoga, though yoga will strengthen such a body.

Yes, collectively, yoga practitioners are far from fat. But advanced yogis are built like athletes, not anorexics.

It is far from accurate to describe even the average yoga enthusiast as skinny.