How Women Can Tone Biceps with Standing Dumbbell Curls 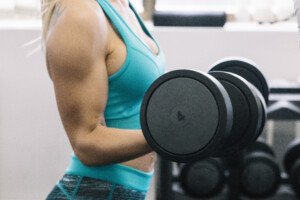 Women can tone and give shape to their biceps (upper part of the front of the arm) with standing dumbbell curls.

Feet should be placed about shoulder width apart, give or take. The knees should be “soft,” meaning, not locked out, but not bent, either. This gives stability.

What’s the arm and hand position for standing dumbbell curls?

Begin by holding the weights with straight arms at your side, palms facing away from you or facing each other (facing thighs). 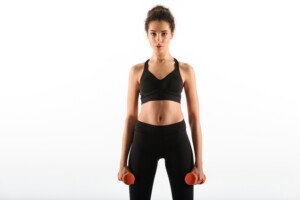 If you assume this second variation, the palms will immediately turn to face away from you the moment you begin lifting the weights.

Only the lower arm moves. The upper arm stays vertical and loosely against the upper body.

I’ve seen many women doing standing biceps curls and quite a few of these women perform this exercise inefficiently, even when using very light weights.

What are the common mistakes women make with standing dumbbell curls?

Many women dig their elbows into their sides as they lift up the weights. This causes the forearms to flare out at an awkward, unnatural angle, and can even make the exercise more uncomfortable than it has to be.

The elbows should not make contact with your body as you move the weights upward.

The second most common mistake that women make with standing dumbbell curls (and many men do this as well) is to allow the upper arm to shift away from a vertical position. Remember, the upper arm must stay vertical to isolate the biceps muscles.

When women do standing biceps curls, they shouldn’t be trying to get the weights as high as possible.

The idea is to “curl” the resistance to stimulate a training effect in the targeted muscles.

Thus, bring the weights as high as you can while keeping the upper arms vertical.