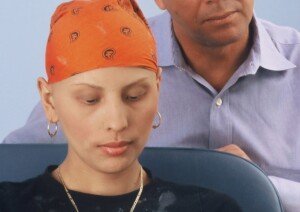 To some women, their hair is a beloved part of their identity, and permanent hair loss from chemo is nothing short of devastating, especially if their hair was previously thick and glorious.

The chemo drug Taxotere has caused permanent hair loss in a very small percentage of women, but even though they know they’re in a small percentage, that’s no consolation to them.

Never say to a woman with permanent baldness from chemo the following:

#1. “It’s just hair. There are more important things in life.”

This won’t cut it. Did it ever occur to you that to some women, their hair is a bounty of sentiment?

Maybe throughout her childhood, some of the strongest mother-daughter quality times occurred when her mother was brushing and styling her hair.

Maybe she has always delighted in sniffing its naturally sweet scent while doing tedious computer work, enjoying the syrupy fragrance of its natural oils.

Some women are very intimately connected to their hair – much more so than any man can ever be “in love” with his sports car!

Sorry, no stars for this one, either. This statement implies that a cancer patient must choose between her hair and her life.

This is not the case, even though women with permanent hair loss from chemotherapy may have thought so prior to their chemo treatment.

Only one chemotherapy drug is solidly known to be linked to permanent baldness: Taxotere. So it’s very wrong to point out, “Would you rather be dead?” or some similar statement.

Even the wigs on famous entertainers can look fake. Beyoncé, anyone? Dolly Parton? Rihanna? With all the money these entertainers have, you’d think they’d sport realistic wigs.

Sure, Rihanna’s pink wigs are obviously fake, but many starlets wear realistic-color wigs with realistic textures (i.e., tight ringlets for a biracial entertainer), yet close-up shots of the hairline clearly reveal that these are wigs.

Wigs may look great on mannequins, but the hairline on a real person with a wig is very difficult to make look real unless the wig hair falls over the hairline.

The second issue with wigs is that some women with permanent chemo hair loss had a natural texture that no wig simulates.

Now, my sister wore a wig when she lost her hair to chemotherapy, and her business clients had no idea; they only thought that her natural hair got a tint treatment.

This is because her natural hair texture is SO TYPICAL that it was easy to fool people with a wig, especially since her natural style was to cover her hairline.

It was a piece of cake finding a wig to duplicate her historical look. She continues to wear the wig for convenience, despite her hair now having grown back (but kept at pixie length by choice). Her clients don’t have a clue.

But what if a woman’s natural texture is very ATYPICAL? Sure, during chemo, people who know her even marginally will know she’s lost her hair since no wig could replicate her atypical texture.

But once chemo is over and she continues wearing the wig, everyone who knows her will think, “That poor woman, her hair is forever gone.”

I don’t think so. For lack of a better phrase, some women have intimate relationships with their hair.

Maybe it’s the unique texture that drives this.

For some women, their hair has pre-eminence over even their breasts. Many women with persistent chemo induced alopecia would gain 100 pounds if it meant getting their hair back.

Whom are you to tell a woman she’ll get over permanent baldness?

What if you’re a six foot tall man and awakened tomorrow standing only five feet?  Think you could get over that?

What if you’re a woman who awakened tomorrow with the deep voice of a man–permanently? Think you’d get over it?

For some women, their hair has a very special place in their life. No woman should have to trade in her hair – permanently – for survival.